A study of legalism #2 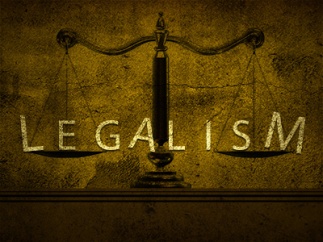 Our study continues on the subject of legality, or legalism. There is much misunderstanding on this subject by many.

First, one form of legality is to have the wrong standard. Legality then becomes making unwarranted or unnecessary demands on yourself or on someone else, especially in areas which are not prohibited in the Scriptures. That becomes legality.

There is a standard which is prescribed. As I have mentioned, the Law of God never changes and it is always right, always applicable and relevant to a Christian. For instance, it is always wrong to murder, or to lie, or to steal, or to commit adultery, or to covet your neighbor’s things. These are always wrong. They are never right. There is no way ever of justifying them.

But there are other areas in which we are given a great deal of personal liberty, and it is legalism to make standards (particularly for someone else) in these areas. Here we must be careful, because, for ourselves, it is proper to set standards or rules which apply to us. When we have difficulty with some situation, or we discover a weakness within ourselves, it is wise to make a rule for our own protection:

“I will not go to bars because I have a weakness toward alcohol and I believe it is something I should avoid. I tend to lose control and get drunk, therefore I won’t go there.” That may be a perfectly proper rule for your life.

“I find myself easily inflamed by pornographic literature,” you may say, “therefore, I won’t read that kind of stuff…plus it is wrong. I find myself sexually aroused to the point where I want to do the wrong thing, so I won’t read literature or go to movies which do that to me.”

It is right to set these kinds of rules and limitations upon yourself. And you will find they will change as you grow as a Christian.

But legality comes in when a group of Christians makes rules for each other, or for anybody else. That is what is wrong. That becomes legalism. We may sit down and explain a situation to somebody and ask him, “Would you agree to observe this standard of behavior if you work or study with us?” If he says “Yes,” then he has agreed, and has adopted the rule for himself. But the Scriptures are careful not to command behavior in certain areas.

When the Corinthians wrote to Paul they asked, “What about these Christians who are eating meat offered to idols?” A group of them were upset about this and they wrote to the apostle, saying, “We don’t think that is right; to us that is demon worship.”

But Paul wrote back and said, “Now be careful!” He said, in effect, “It would be the easiest thing in the world for me, as an apostle, simply to say, ‘Yes, you are right, don’t eat meat offered to idols,’ but I am not going to say that. What I am going to say is that here is an area where each man must be fully persuaded in his own mind. You can’t make rules for each other, and you have to honor a weaker brother’s conscience. If he is troubled by a certain action then don’t flaunt your liberty in his presence, but be careful of one another and love each other.”

So it becomes legality for Christians to levy standards of achievement or behavior or spirituality upon others. Today this involves matters concerning clothing styles, length of hair, certain demands of ritual observance — like whether you may cut your lawn on Sunday or not, whether or not it is right to eat meat on Friday, food and behavior restrictions — all these things become legality when they are legislated upon somebody else.

These are areas in which we are left free to be guided by our conscience, instructed by the Word of God in general principles. We are free to counsel one another, and help one another, but not to legislate. It is wrong, absolutely wrong, to do so. It becomes legality when we make unwarranted demands upon others in an area not prohibited by Scripture. This focuses upon the what of an issue, what it is you are supposed to do, and you can be legalistic at this point.

A second form of legalism (and it is the same basic thing, even though it takes another form) has to do with the power upon which you rely in order to act. Legalism is also the making of quite proper demands, but making them on those who have no awareness of the proper power it takes to fulfill them. That becomes a very subtle form of legality because it is always based on a proper demand. It is in the realm which Scripture authorizes — thou shalt not murder, thou shalt not steal, thou shalt not lie, and so on — a moral code which is approved of in the Scriptures. But even in that area it is wrong to make a demand upon someone who doesn’t understand the power by which it is to be met. It becomes legality.

Do you see how subtle this can be? The actual behavior can be exactly the same in the case of a legalist or of one behaving as an authentic Christian. They both may be real Christians and their behavior may be exactly the same, but one is legalistic and the other is not. It is what is going on inside that is the issue in question. It is a matter of inner reliance. What are you reckoning on to meet this demand? Are you counting on your ability, your own adequacy, your talent, your personality? Is that what you are reckoning on in order to accomplish what is expected of you? Well, if you are reckoning on anything other than the activity of God at work in you, you are a legalist!

We all do this from time to time. Who has not found himself falling back into some form of reckoning upon himself — either his ability (to try to show someone what he can do) or his inability (to use as an excuse). If you do this you immediately become a legalist. This is focusing now on the how you are going to do something. The most widespread form of legality in the Christian church is the flesh — trying to do something before God which will be acceptable to him.

The flesh is the old life, the natural life inherited from Adam, with its apparent resources of personality, of ancestry, of commitment, of dedication, and so forth. You can do all kinds of religious things in the flesh. The flesh can preach a sermon. The flesh can sing in the choir. The flesh can act as an usher. The flesh can lead people to Christ. Did you know that? The flesh can go out and be very zealous in its witnessing and amass a terribly impressive list of people won to Christ, scalps to hang on a belt. The flesh can do these things but it is absolutely nauseating in the eyes of God. It is merely religious activity. There is nothing wrong with what is being done, but what is terribly wrong is the power being relied upon to do it. That is legality.

That is why, in any Christian activity, you have to be careful that your inner reliance is on God, and not on you. Otherwise it comes out all wrong and makes all the difference between heaven and hell, life and death. You can do exactly the same thing that someone else is doing, and, if you do it with a sense of reliance on anything other than the Spirit of God, what they do will bless people but what you do will curse them. It is the very same action, absolutely the same. What you do one moment, trusting in God’s Spirit, will bless people and strengthen them and bless your own life and enrich and fulfill it, but the very next moment you can do exactly the same thing in the power of the flesh, and it will be damaging and destructive and hurtful to others and to you. That is why you need to recognize the subtlety of all this and to be aware that God looks not at the outward appearance, as man does, but at the inner heart. What is going on inside is all-important to God.

Now let’s move to the third area. You can go wrong in the motive which moves you to do things. Legality is also the fulfilling of external requirements for reasons of self-exaltation or personal merit. Here we are focusing on the why of what you do. You must be right in what you do, how you do it, and why you do it.

Why do you do things? Are you trying to build a reputation for yourself? Do you want a name as a spiritual Christian? — and so you let it be known how many Bible verses you memorize each week, how many hours you spend in prayer, and how much you give to the missions.

That is exactly on a par with the religion of the Pharisees. This is what Jesus is highlighting in the Sermon on the Mount — men who love to be seen before men instead of being content to be visible only to the God and Father who sees in secret. If what is motivating you is a desire to gain preeminence, some prominence as a Christian, if you long to have your name blazoned before others, published around the world, known here and there, and if you love to table-hop at Christian conventions (believe me, I know plenty about this in my own heart), this is legality. It is a stench in the nostrils of God. It will end up producing only death in your life and increasing the shame and reprobation of Christianity before the world.

Of course, combinations of these failures are possible. You can be wrong at two points as well as one, or at all three — and then you are really a legalist! You can be an obvious legalist as well as a subtle one. But it is all legality. It is what the Scriptures fight unstintingly and what the enemy is clever to cover over and make look like something good.

Now we are ready to attempt a definition of legality which I hope will fit all the circumstances we have looked at. (more to come)

Posted by Gary E. Davenport on December 19, 2019 in legalism