Ephesians 4:32 (ESV)
32  Be kind to one another, tenderhearted, forgiving one another, as God in Christ forgave you. 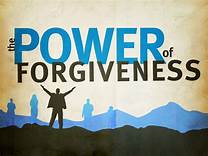 Two Christians appeared before the court on charges of assault and a breach of the peace.

When the magistrate had listened to all the evidence, he called them to the bench and whispered to them, “Being Christians, the two of you, couldn’t you have settled this matter out of court?”

One of the men, who still had a black eye, said to the judge, “SURE we could have settled this out of court, your Honor! And that’s exactly what we were TRYING to do when the POLICE arrived!”

When missionaries first came to Labrador, they found no word for forgiveness in the Eskimo language.  So they had to make one which meant, “not being able to think about it anymore.”

Some Pictures of Forgiveness

(Isa 38:17 NIV)  “Surely it was for my benefit that I suffered such anguish. In your love you kept me from the pit of destruction; you have put all my sins behind your back.”

(Micah 7:19 NIV)  “You will again have compassion on us; you will tread our sins underfoot and hurl all our iniquities into the depths of the sea.”

It means releasing the resentment, hatred, bitterness, ill-will & desire for revenge.  It means you don’t hold a grudge, or cherish bitterness or harbor any desire to harm them. It means dropping the case we have against them.

Does have to be from the heart (Mat 18:35 NIV)  “”This is how my heavenly Father will treat each of you unless you forgive your brother from your heart.””). We can’t just say the words. This is difficult to determine sometimes because we can’t necessarily keep ourselves from having primary feelings like anger. But we can make choices, including the choice to let go of the things that anger often leads to, like resentment, hatred, bitterness, & ill will.

Does mean we stop dwelling on what was done to us. We may not be able to forget what happened and our mind may go there once in a while, but forgiveness does mean we don’t dwell on it anymore. It is taking the arrows out of our gut instead of continuing to twist them around inside of us.

Whereas before we may have nurtured that hurt to keep it active & alive. We remove the band aid and “rub it” to “keep the hurt alive.”

But now we refused to do that. That may take some prayer to keep releasing it to God, but we don’t let our mind stay there.

Does mean treat them with love, even if we don’t feel it. Feelings are important, but they are not what we base our decisions on. We forgive because it is the right and healthy thing to do, and then we treat the person with love.

When God forgives us, he doesn’t wait to see how it’s going to go before he starts to bless us again.

It does mean we are opening a door for reconciliation. That’s one of the purposes. God’s people are supposed to be reconciled to each other. We can’t say ok I forgive you but I never want to see you again.

Doesn’t mean you have to be the best of friends, but it does mean you tear down the walls. And remember, reconciliation takes two people—they have to be open to it as well.

Does mean we’ll have to take responsibility for our own happiness & we’ll have to change. As long as we’re resentful we give ourselves an excuse not to do the hard work of looking at ourselves and changing our own lives.

One of the real keys is for us to see clearly how important it is to do so.

Let me share several reasons why we need to forgive.  1. God said to.

(Col 3:13 NIV)  “Bear with each other and forgive whatever grievances you may have against one another. Forgive as the Lord forgave you.”

(Mat 18:21-22 NIV)  “Then Peter came to Jesus and asked, “Lord, how many times shall I forgive my brother when he sins against me? Up to seven times?” {22} Jesus answered, “I tell you, not seven times, but seventy-seven times.”

(Mat 18:35 NIV)  “”This is how my heavenly Father will treat each of you unless you forgive your brother from your heart.””

If you receive grace, you’ll pass it on. If you harden your heart, you either forfeit his grace or never had it to begin with. You cannot take a grudge to heaven.

We need relationships; we were made for relationships. And those of us in the body of Christ “belong to each other.”

And we need to try to make all our relationships good. The trouble is none of the humans who are available to have a relationship with is perfect.

Some years ago, after a vigorous brotherly and sisterly disagreement, three children retired only to be aroused at two o’clock in the morning by a terrific thunderstorm. Hearing an unusual noise upstairs, the father called in to find out what was going on. A little voice answered, “We are all in the closet forgiving each other.”

This is huge. Researchers have discovered direct links between forgiveness and physical & emotional health.

The bitterness & resentment we feel will also alienate us & cut us off from others. It will make us suspicious & fearful of relationships. It will isolate us. Unforgiveness destroys community. Churches ought to be a no-debt zone, but it’s not always so.

(Heb 12:14-15 NIV)  “Make every effort to live in peace with all men and to be holy; without holiness no one will see the Lord. {15} See to it that no one misses the grace of God and that no bitter root grows up to cause trouble and defile many.”

Luke 7:36-50 (ESV)
36  One of the Pharisees asked him to eat with him, and he went into the Pharisee’s house and reclined at the table.
37  And behold, a woman of the city, who was a sinner, when she learned that he was reclining at table in the Pharisee’s house, brought an alabaster flask of ointment,
38  and standing behind him at his feet, weeping, she began to wet his feet with her tears and wiped them with the hair of her head and kissed his feet and anointed them with the ointment.
39  Now when the Pharisee who had invited him saw this, he said to himself, “If this man were a prophet, he would have known who and what sort of woman this is who is touching him, for she is a sinner.”
40  And Jesus answering said to him, “Simon, I have something to say to you.” And he answered, “Say it, Teacher.”
41  “A certain moneylender had two debtors. One owed five hundred denarii, and the other fifty.
42  When they could not pay, he cancelled the debt of both. Now which of them will love him more?”
43  Simon answered, “The one, I suppose, for whom he cancelled the larger debt.” And he said to him, “You have judged rightly.”
44  Then turning toward the woman he said to Simon, “Do you see this woman? I entered your house; you gave me no water for my feet, but she has wet my feet with her tears and wiped them with her hair.
45  You gave me no kiss, but from the time I came in she has not ceased to kiss my feet.
46  You did not anoint my head with oil, but she has anointed my feet with ointment.
47  Therefore I tell you, her sins, which are many, are forgiven—for she loved much. But he who is forgiven little, loves little.”
48  And he said to her, “Your sins are forgiven.”
49  Then those who were at table with him began to say among themselves, “Who is this, who even forgives sins?”
50  And he said to the woman, “Your faith has saved you; go in peace.”

The woman admitted she was a sinner and gave evidence that she was a repentant sinner. If you check a harmony of the Gospels, you will discover that just before this event, Jesus had given the gracious invitation, “Come unto Me … and I will give you rest” (Matt. 11:28-30).

It was thus a triple insult that Simon had directed against the Lord of life; not merely the basin and the towel, but the customary greeting of a guest with a kiss, and the anointing of the head with oil had also been withheld.

The one thing which shuts a man off from God is self-sufficiency.

Posted by Gary Davenport on May 7, 2020 in ephesians, Forgiveness