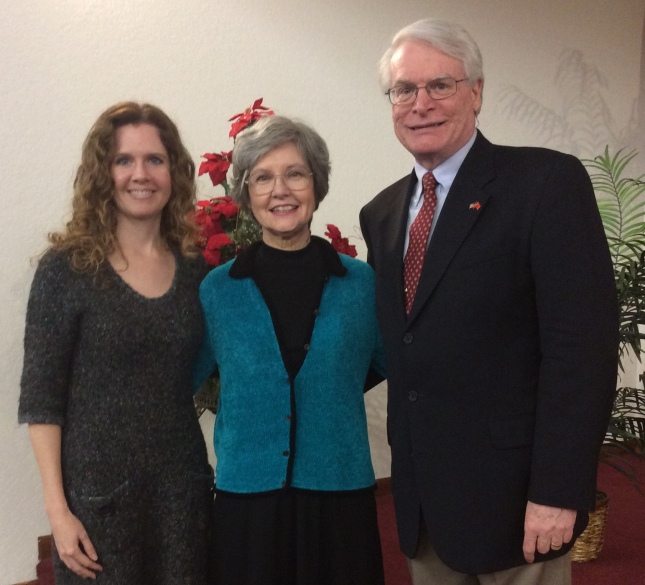 Gary and Terry Davenport with their daughter, Tonia (taken in early 2016)

I was born in Louisville, Kentucky on October 30, 1950, but spent most of my life in Chattanooga, Tennessee. I met my wife, Terry, while a student at Middle Tennessee State University in Murfreesboro, Tennessee. We married on July 2, 1971 and have three children, Tonia (age 40), Eric (age 38), and Gregory (age 36). Tonia (May, 1999) and Eric (May, 2000) graduated from Harding, and Gregory attended one year.

Terry was born in Waco, Texas and spent most of her early years in Phoenix, Arizona, moving there when she was eight years old. She attended Lubbock Christian College for two years and went one year to David Lipscomb College, before transferring to M.T.S.U., in Murfreesboro,Tennessee, where we met, married and both graduated in 1972.

Tonia is now working in the Fort Lauderdale area. Gregory is serving our country in the Coast Guard. He and Andrea Yaw were married on September 2, 2006. They gave birth in May, 2010, to Colton Clark and moved to Hollywood, Florida to begin new Coast Guard responsibilities June 23, 2010. Gregory and Andrea welcomed another son, Connor, in May, 2013 and our only granddaughter, Abigail, in 2014.

Eric and Wendy were married in June, 2000. They have two children Brinson (15 years old) and Aiden (13 years old). Beginning in August, 2012, Eric and his family moved to Shiyan, China, to teach Oral English and spread Good News to the college students and teachers there. They have adopted Sheldon (8 years old) and Pierce (7 years old)  these past few months. They left China and moved to Kigali, Rwanda to begin mission work there in mid-August, 2015.

My parents are Buell and Rheda Davenport, who have been members at the East Brainerd church of Christ in Chattanooga since 1960. My Dad was one of the elders there until his death on December 2, 1996. He had also preached at some of the smaller congregations in the Chattanooga on a regular fill-in basis.

A brother-in-law, John Kachelman (Freed-Hardeman graduate), preached for the Judsonia church of Christ in Judsonia, Arkansas, for several years. He is now working primarily in mission work to the Ukraine. John speaks often on the Freed-Hardeman University and Faulkner lectureship programs and makes two mission trips annually to the Ukraine for missionary efforts.

A brother, Bo Davenport, is the administrative director of the Atlanta Intercity Ministry. Four of my eight brothers and sisters attended Freed-Hardeman College in Henderson, Tennessee.