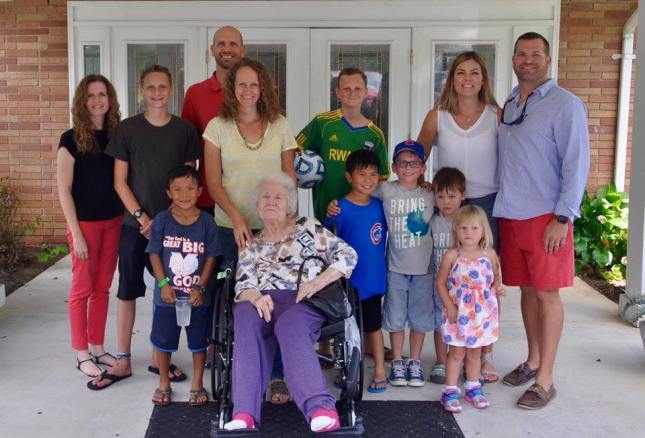 Our children and grandchildren with my Mother, Rheda Davenport, taken 2018

I was born in Louisville, Kentucky, but spent most of my life in Chattanooga, Tennessee. I met my wife, Terry, while a student at Middle Tennessee State University in Murfreesboro, Tennessee. We married on July 2, 1971 and have three children, Tonia, Eric, and Gregory. Tonia (May, 1999) and Eric (May, 2000) graduated from Harding, and Gregory attended one year.

Terry was born in Waco, Texas and spent most of her early years in Phoenix, Arizona, moving there when she was eight years old. She attended Lubbock Christian College for two years and went one year to David Lipscomb College, before transferring to M.T.S.U., in Murfreesboro, Tennessee, where we met, married and both graduated in 1972.

Tonia is now working in the Fort Lauderdale area.  Gregory is serving our country in the Coast Guard. He and Andrea Yaw were married on September 2, 2006. They gave birth on May 5, 2010, to Colton Clark and moved to Hollywood, Florida to begin new Coast Guard responsibilities June 23, 2010. Gregory and Andrea welcomed another son, Connor, in May, 2013 and our only grand-daughter, Abigail, in 2015.

Eric and Wendy were married in June, 2000, and Eric has concluded the course work on a Masters of Divinity degree through the Harding Graduate School in Memphis. He worked just over three years as a youth/family minister in Mandeville/Covington, Louisiana.  After 30 months of on-campus study in Memphis, he moved to San Antonio, Texas, to begin working with the Northwest church of Christ in December, 2006. They have two children (18 years old) and Aiden (16 1/2 years old).

Beginning in August, 2012, Eric and his family moved to Shiyan, China, to teach Oral English and spread Good News to the college students and teachers there. They have also adopted Sheldon (in 2014) and Pierce (in 2015).

He and Wendy (actually the whole family) is now doing mission work in Kigali, Rwanda, finishing their third year this summer.

My parents are Buell and Rheda Davenport, who have been members at the East Brainerd Church of Christ in Chattanooga since 1960. My Dad was one of the elders there until his death on December 2, 1996. He had also preached at some of the smaller congregations in the Chattanooga on a regular fill-in basis.

A brother-in-law, John Kachelman (Freed-Hardeman graduate), preached for the Judsonia church of Christ in Judsonia, Arkansas, for several years. He is now working primarily in mission work to the Ukraine. John speaks often on the Freed-Hardeman University and Faulkner lectureship programs and makes two trips annually to the Ukraine for missionary efforts.

A brother, Bo Davenport, served as youth minister at the Campus Church of Christ in Norcross, Georgia, for several years and is now the administrative director of the Atlanta Intercity Ministry. Four of my eight brothers and sisters attended Freed-Hardeman College in Henderson, Tennessee.

I graduated from Tyner High School (Chattanooga, Tennessee) in 1968 and from Middle Tennessee State University (Murfreesboro, Tenn.) with a Bachelor of Science degree in 1972.

I also have some 11 undergraduate hours of Bible from Harding University and David Lipscomb University. I received those while working as a campus minister at MTSU (the D.L.U. hours one summer and the Harding hours through extension classes offered at the MTSU Christian Student Center).

I have also facilitated classes offered at our congregation for extension credit from the Sunset International Bible Institute. I have also been trained to use and conduct Serendipity sessions through a seminar conducted by Lyman Coleman.

June, 2016 – January, 2018 – Conducted Skype Bible study for 5-7 individuals who live in China, Japan, and miscellaneous geographical locations…each Saturday night for two hours. Discontinued only after need changed and others took my place.

January 1, 2013 – September 5, 2013: Terry has been attending a language school here in Beijing, China, so we could get our Visa to stay in the country. I have been working full-time with the Beijing church of Christ (beijingchurchofchrist.com) in addition to having numerous private studies with individuals and groups in our home. Our Visa issues caused us to leave the work much earlier than we intended.

February 14, 2011-December 30, 2012 – Terry and I were in Jingzhou, China teaching conversational English in a university there. In our private times, we were sowing seed among the Chinese youth through small group studies. We were limited to only two years there due to age restrictions at our university.

September, 2007—April, 2010 — Served as the minister at the Parkway church of Christ in Sacramento, California. Parkway is a congregation of some 260 Christians with two elders and 9 deacons and a part-time family minister. We were multi-cultural in makeup, drawing from all segments of our society. Sacramento County is notably diverse and heralded as one of the most racially and ethnically integrated major cities in America. We had both a Spanish-speaking and English-speaking congregation using our building each week. I was also the administrator/facilitator for the Northern California Bible Institute, offering video Bible courses through the Sunset International Biblical Institute, of Lubbock, Texas. We offered a class for credit on Tuesday evenings through the school year for those interested in receiving college-level credit, though most attending audit it. I also wrote lessons and directed our small groups, which meet six months of each year on Sunday evenings. I was also the webmaster for our website. Obviously, I was also part of a visitation ministry and conduct funerals and weddings when called upon by our members. I helped direct our adult education ministry, led singing on special “singing emphasis” nights, and small groups ministry (we meet on Sunday evenings half of the year in home and half of the year at the building using a variety of events).

April, 2004-September, 2007– Serving as minister for the Mentor church of Christ in Mentor, Ohio, a congregation of some 175 members in Northeastern Ohio. I was also the administrator/facilitator for the North Coast Bible Institute here in Mentor, offering video Bible courses through the Sunset International Biblical Institute, of Lubbock, Texas. We offered a class for credit each Tuesday evening through the school year for those interested in receiving college-level credit. I oversaw our LIFE groups, which met monthly and led singing on our singing nights. I taught an adult class each Sunday and Wednesday in addition to a ladies class on Tuesday mornings. I was also the webmaster for our website and the editor of our church bulletin. I had many weeks when I presented as many as 7-8 lessons to different audiences. Obviously, was also part of a visitation ministry and conduct funerals and weddings when called upon by our members.

January, 1992-April, 2004 — Pulpit minister for the West Broward Church of Christ, 12550 Broward Boulevard, Plantation, Florida, 33325. We were a congregation of 450 members with five elders, 11 deacons, an associate minister and a youth minister when we moved. We had been in a new building since June of 1995, and experienced great numerical and spiritual growth since the move, averaging more than 153 more per Sunday morning since that date. We were formerly the Andrews Avenue Church of Christ, located at 1153 South Andrews Avenue in downtown Fort Lauderdale. We expanded our building with nine new classrooms, moving in on January, 2000. I worked in all aspects of  planning with the elders of our ministry system. I also led singing on “singing nights” and conducted in the early years a quarterly Sunday afternoon devotional service at the Broward Correctional Facility, a medium security prison for women in the county. I also helped organize an effective ministry system with the deacons and also a “We Care” small-group ministry, which is aimed at getting members into each other’s home for fellowship and edification. I was also the webmaster of our website and editor of our weekly church bulletin.

1989-1992 — Education minister, East Brainerd Church of Christ, 7745 East Brainerd Road, Chattanooga, Tenneseee  37421.  Was in charge of all classes for all ages of 525-plus member congregation, in addition to compiling Sunday morning material for adult Bible program. I also led singing on a regular basis and preached at least 10-12 times per year on a fill-in basis.  When I began working at Boyd-Buchanan School (see below), I worked only part-time for the East Brainerd congregation. They recently moved into a new auditorium and are averaging over 750 on Sunday morning.

1986-1989 — Pulpit minister, Brookwood Way Church of Christ, 248 N. Brookwood Way, Mansfield, Ohio  44906.  We were a congregation of just over 220 members. I was very involved in building home Bible study groups which met both edification\fellowship needs and also evangelism. While in Mansfield, I was also on contract with the state of  Ohio as an emergency chaplain at the Mansfield Correctional Institute (a medium security prison for men), where I conducted regular Sunday morning worship services and did occasional workshops and new inmate interviews for the chaplain’s office. Also led singing on singing nights and wrote education materials for adults.

1982-1986 — Worked as education minister at the Brainerd Church of Christ (425 members at the time), in addition to leading singing and teaching adult classes. Helped implement ministry system while there in addition to writing adult Bible school material for all Sunday morning adult classes. Had five elders and 14 deacons. I also preached on a regular basis.  For 15 months, while at Brainerd, I served as a Bible School consultant with Sweet Publishing, helping to introduce their materials in the Tennessee, Georgia, Alabama area in addition to conducting teacher workshops where requested.

1979-1982 — Campus minister and director, Middle Tennessee Christian Center, 1105 E. Bell Street, Murfreesboro, Tennessee, 37130. I also worked as an education minister and song leader for the East Main Church of Christ for two of those years while in Murfreesboro. Worshipped at the North Boulevard congregation during the last 2 1/2 years, leading singing and teaching college and adult classes while a campus minister. Our college program grew from 30 to over 140 students during my time there, with a core group of 80. It was normal to have 85-90 students for our Wednesday night Bible class at the North Boulevard congregation the week of mid-terms and finals.

1972-1979 — Sports reporter for the Chattanooga News-Free Press in Chattanooga, Tennessee. I majored in secondary education and  journalism, with a minor in English in college. I covered all aspects of local and state sports, including Ohio Valley Conference events and occasionally the University of Tennessee and Vanderbilt University sports. I began working part-time as a sportswriter while in high school and was the sports editor of the school newspaper at M.T.S.U. my four years.