Once upon a time a man was shipwrecked on a deserted island. He was an industrious, hard-working sort of man, so by the time he was rescued, 15 years later, he had managed to transform the island into a collection of roads and buildings. The people who rescued him were amazed at his accomplishments and asked for a tour of the island. He was more than happy to oblige. 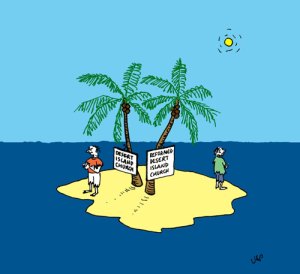 “The first building on our left,” he began, “is my house. You’ll see that I have a comfortable three-bedroom estate, complete with indoor plumbing and a sprinkler system. There is also a storage shed in the back for all my lawn tools.” The rescue party was astonished. It was better than some of their homes on the mainland.

“That building over there is the store where I do my grocery shopping. Next to it is my bank, and across the street is the gym where I exercise.”

Conflict is a part of life. There is simply no getting away from this fact. As a leader, as a human being, you can be sure that you’ll face relational conflicts. No leadership model exists that will totally eliminate disagreements or clashes of personality. In fact, the tension that comes from conflict can be healthy and beneficial to growth if dealt with correctly.

Leaders and group members who say they want to leave conflicts to time may be revealing the following:

A conflict is unhealthy if the members do not process their pain (fear, anger, embarrassment, guilt, etc.) of growth and conflict resolution. Emotional pain is inherent in growing or resolving conflicts; therefore, a conflict which otherwise should be healthy becomes unhealthy if the pain is not processed.

(Jeremiah 6:16-17) “This is what the LORD says: “Stand at the crossroads and look; ask for the ancient paths, ask where the good way is, and walk in it, and you will find rest for your souls. But you said, ‘We will not walk in it.’ {17} I appointed watchmen over you and said, ‘Listen to the sound of the trumpet!’ But you said, ‘We will not listen.'”

(1 Corinthians 11:17) “In the following directives I have no praise for you, for your meetings do more harm than good.”

A conflict is unhealthy if some of the group members attempt to deal with it outside the relationship in which the conflict originated. This is a principle which leaders find very frightening; therefore, few percentage wise believe it or comply with it. However, the scriptures are very clear regarding this principle.

Don’t let someone outside  of God’s will discourage you from doing God’s will.

Jesus and the Art of Conflict Management

When Jesus addressed problems, he tackled them head-on. While delivering the Sermon on the Mount (and later in Matthew 18) he dealt with the issue of conflicts brought about either by others offending us or by our offending them: Matthew 18:15-17 Matthew 5:23-24

While the Lord was addressing the problem of sin, there are broader principles at work in his teaching. And no matter which side has caused the problem, the solution is the same: First, go to the person with whom you are experiencing a conflict and address the issues face-to-face.

Avoid involving a third or fourth person, especially if their knowledge of the situation will worsen the problem for the offending individual. Such discussions tend to intensify the conflict and further undermine the relationship. Judging from the amount of conflict experienced in our world, this is surely one of the most overlooked commands in Scripture.

Jesus tells us to first go to the person one-on-one. Second, go to the person quickly. Jesus counseled that, if someone is worshiping God and remembers that he or she has offended a friend, the appropriate response is to stop right there and go immediately to the offended individual. With those words Jesus made it clear that correct interpersonal relationships are more important than correct ritual.

This tends to grate against religious folks who say that God must be our first priority. It is true that God should be our primary focus. However, our relationship with God is better gauged by our human relationships than by religious ritual. Although we cannot guarantee that the offended brother will accept us, we are obligated to make every effort “as far as it depends on” us (Romans 12:18).

Interestingly, in both cases, Jesus’ advice is to take the initiative. When you have done something wrong, you go and make it right. When someone else has wronged you, you still take the first step.

The key to conflict management is prompt reconciliation by “speaking the truth in love” (Ephesians 4:15). Effective conflict managers know how to balance truth (confrontation) and love (reconciliation). Effective leaders learn to be peacemakers by dealing directly with disagreements and seeking amicable resolutions. David shows us that putting off confrontation only strains relations and inevitably compounds the problem. Avoidance allows bitterness to simmer and alienation to solidify.

While the word conflict usually carries a negative connotation, conflict itself doesn’t have to be negative. That’s why this chapter is titled “Conflict Management” rather than “Conflict Resolution” – a conflict is not something that simply needs to be “resolved,” as though getting through it and moving on are the highest goals. Often we inappropriately assume that spiritual maturity will lead to fewer conflicts.

Conflict produces energy, and energy can be channeled in positive directions. How can a leader make this happen? The Apostle Paul gives us the keys to managing conflict with the goal of a positive outcome: As a prisoner for the Lord, then, I urge you to live a life worthy of the calling you have received. Be completely humble and gentle; be patient, bearing with one another in love. Make every effort to keep the unity of the Spirit through the bond of peace. Ephesians 4:1-3

The critical issue in conflict management – and the one that most strongly influences one’s approach to it – is this: “What will my proper management of this conflict accomplish?” Christians who live up to their calling (v. 1) must “keep the unity of the Spirit through the bond of peace” (v. 3); that’s the preferred outcome. So how can a godly leader approach conflict so that it cements unity between the participants?

Imagine how people would approach conflict if humility, gentleness and patience provided the context in which all participants viewed the solution, and if unity and peace were the sole motives.

You may object, “Conflict produces growth and unity? I’ve never heard of that before.” But conflict between people produces energy, and energy can be channeled in different directions. For example, a conflict between a husband and wife can serve as a venue for open and honest discussion, which can lead to greater understanding between the two and, in turn, a better relationship.

Loving Your Way through Conflict

“You have heard that it was said, ‘Love your neighbor and hate your enemy.’ But I tell you: Love your enemies and pray for those who persecute you, that you may be sons of your Father in heaven. He causes his sun to rise on the evil and the good, and sends rain on the righteous and the unrighteous.” — Matthew 5:43-45

Three ways by which we can do “love our enemies:

1. First, we must develop and maintain the capacity to forgive. Such forgiveness doesn’t mean that we ignore the wrong committed against us. Rather, it means that we will no longer allow the wrong to be a barrier to the relationship. Forgiveness, according to King, “is a catalyst creating the atmosphere necessary for a fresh start and a new beginning.”

2. Second, we must recognize that the wrong we’ve suffered doesn’t entirely represent the other person’s identity. We need to acknowledge that our opponent, like each one of us, possesses both bad and good qualities. We must choose to find the good and focus on it.

3. Third, we must not seek to defeat or humiliate our opponent, but to win his or her friendship and understanding. Such an attitude flows not from ourselves, but from God as his unconditional love works through us. As followers of Christ who seek to lead as he led, we must remember that the more freely we forgive, the more clearly we reveal the nature of our heavenly Father.

Posted by Gary Davenport on June 4, 2014 in Sermon