RSS
← The heart of a little man
I am thankful… → 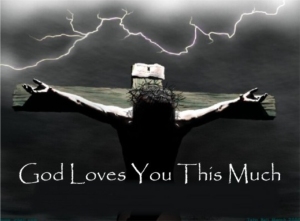 The parable is followed by a record of women with questionable background who followed Jesus. (A woman who had been demon possessed. A woman who was the wife of Herod’s finance minister and a woman named Susanna. I don’t know who she was.) These women are contributing to Jesus’ ministry out of their own personal financial means.

Simon is about to have a fit. He makes an assumption. The problem with the assumption is that the premise is wrong. He thinks that Jesus is either not a prophet or He is a bad prophet.

Why is Jesus risking ceremonial defilement in allowing the sinner woman to touch Him?

Jesus tells a parable to answer the unasked question:

In the parable one man owes the equivalent of $50,000 to a man who makes about $30,000 per year and the other owes $5,000. Both are unable to repay. Both are graciously forgiven. Which will love Him more?

Verse 47 should be translated “Because she was forgiven, as a result, she loved much.” We know this because the next phrase says, “he who is forgiven little loves little.”

Who is this that forgives sin? This goes unanswered, but it is obvious.

How do you get forgiveness? Verse 50 says “your faith has saved you.” Because she was forgiven, she could go in peace. She didn’t have the awful debt hanging over her head.

Love is the evidence of forgiveness which can only be received by faith in Christ. Those who recognize that they have been forgiven much, respond with worship to God and love to others. Those who don’t recognize their need for forgiveness are self-righteous.

Simon had a faulty concept of who Jesus was and what he shooed do. This reveals the basic problem of the religious leaders.

Simon would have recognized that he was the one who owed 50 denarii. The woman would have recognized that she was the one who owed 500 denarii. Who would Jesus have said owed 500 denarii? He would have agreed with Simon. The woman was the bigger sinner. But Simon was a sinner too. He had a debt he could not repay. He showed no love which raised the question of whether or not there was forgiveness of even the smaller debt.

Our tendency is to jump to the question – “How much love should be shown?” But that is not a proper question to ask. If we ask the question, we have missed the point of the parable.

We must be careful not to reverse the process and say that our love results in forgiveness.

Illustration: Some of you were raised in a Christian home. You never got into any serious trouble, never got arrested, never did drugs, never got drunk. Some of you, on the other hand, might have been more rebellious and been in trouble with the law, done drugs.

Analogy: The worst thing some of you ever did might have been to shoot a BB gun and break a window. Others of you threw bricks through the window. The question is this? How much do the windows cost? They cost the same. They both needed to be replaced.

If you have the idea that the flat tire you had was because you skipped your quiet time two days in a row, then you fall into this second category.

If you remember, Jesus healed the Centurion’s slave in 7:1-10 and raised the widow’s son in 7:11-17. Those were two people who recognized their need. Here we have a Pharisee who does not recognize his need and so Jesus can’t “heal” him.

It was customary in that day for outsiders to hover around during banquets so they could watch the “important people” and hear the conversation. Since everything was open, they could even enter the banquet hall and speak to a guest. This explains how this woman had access to Jesus. He was not behind locked doors. In that day women were not invited to banquets.

The present passage contrasts the attitudes of the sinful (repentant) and the self-righteous. It needs to be studied carefully, for self-righteousness is a serious sin. It is both common and damning.

LUKE 7:36-38 — 36 Now one of the Pharisees invited Jesus to have dinner with him, so he went to the Pharisee’s house and reclined at the table. 37When a woman who had lived a sinful life in that town learned that Jesus was eating at the Pharisee’s house, she brought an alabaster jar of perfume, 38and as she stood behind him at his feet weeping, she began to wet his feet with her tears. Then she wiped them with her hair, kissed them and poured perfume on them.

This is a passionate scene. She comes to Jesus with the obvious intent of anointing him with the ointment. She winds up paying respect in four different ways:
1. Her tears wash his feet. The verb “wet” is translated in other places, “rain.” Tears streamed down her face and fell profusely upon his feet. Enough tears, in fact, to wash them.
2. Wiped his feet with her hair. All vanity is gone (cf. 1 Cor 11:15). With the most humble act she ministers to the Lord.
3. Kissed his feet. This is a strengthened form of the verb “kiss.” In other words, she kissed his feet profusely.
4. Anointed his feet with ointment. Ointment was more expensive than oil. It has a heavy, rich smell like perfume. The word used here for “anoint” is not the normal religious act (“to pour”) but what we might translate as “rub” or “massage.”

Simon’s thoughts can be summarized in the following logical syllogism:

Posted by Gary Davenport on November 16, 2015 in Sermon

← The heart of a little man
I am thankful… →