RSS
← It IS a wonderful life!
Discipleship →

Words To Live By Series: #1 We Need Some Rules!

People of our generation seem to have no reluctance about challenging God’s authority over their lives. Almost every group in our nation would dare suggest doing away with certain of the principles that are taught in the Book of Books. Most of the rest of 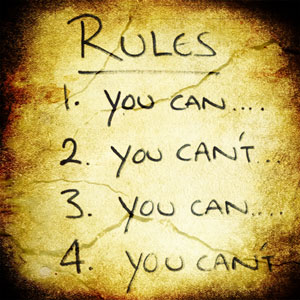 us have felt free to challenge any (or all) of them that get in the way of our own self-willed lifestyles.

Murder, rape, theft, and perjury are in the news so often that we are not even shocked by them anymore. Corrupt politicians, dishonest businessmen, and philandering neighbors hardly raise an eyebrow. Pornography is sold at the comer market, drugs are dispensed in school hallways, and TV brings the coarsest of language right into our family rooms.

America is turning away from God, closing its ears, refusing to hear. We have created a world that has no significant place for God in its educational programs, scientific pursuits, movies, music, homes, or hearts. What fools we are to separate ourselves from the only hope we have for making life meaningful!

Everyone is talking about the problems facing our generation. Educators, sociologists, and politicians are acknowledging that we have lost all sense of moral direction as a society. Only one source of dependable direction is available. And we must turn back to that divine source quickly. We must remember God, seek God, hear God, obey God. We must begin living by the rules heaven has given in Scripture.

Frightening statistics point to the breakdown of law, moral responsibility, and even conscience in our world. Figures released by the federal government indicate that there is one serious crime committed every two seconds in the United States of America.

We are a nation under siege. We are a people living in fear. Worse still, perhaps, is the involvement of so many young people in crime and immoral behavior. Teen-aged Americans account for almost a third of all violent crime arrests in the country.

What Has Gone Wrong? What has happened in this “enlightened” world of ours? Our society has rejected the notion of fixed norms for conduct, and we lack the internal control that comes to people who have a strong sense of right and wrong.

We’ve not only broken the old rules, we’ve gone beyond that to say that nobody has the right to make rules for our generation. Without rules, norms, or standards, we are moving toward chaos. We really do need a fixed standard for our lives. We need both goals and limits. We need a strong sense of what is desirable and what is forbidden. We need the security which comes or having some dependable rules for right living.

A U. S. Army official has said: “The army would like to see every American parent, teacher, and clergyman work to give our children . . . a firm regard for right and an abiding distaste for wrong.”

A sociologist, discussing the crime problem among teenagers, observed: “They grow up lacking the internal controls needed to stay on course.”

An impossible situation is created when this creed of self-interest governs our notions of what is right and wrong.

We must get back to the Word of God. We need to know the rules for right living. We simply must have a fixed standard by which to measure our deeds. The Bible provides exactly what we need for the moral direction of a human life. 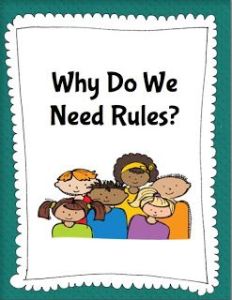 Our self-chosen ways usually lead to our destruction. “There is a way which seems right to a man, but its end is the way to death” (Prov. 14:12).

My moral obligations to you do not arise from some sort of social contract we have established with one another. Those obligations grow out of the fact that you are in the image of God, and I owe you respect for that reason alone.

Since God is infinitely holy, wise, and just, we can put full confidence in the things he commands. His holiness is at the root of our obligation to moral purity. He asks nothing of us that is not already in evidence in his own character and nature.

I don’t resent the rules that I find God giving me in the Bible, because I know something about God and his workings. If I were to stumble across the Bible and read some of its rules for the living of a human life, I might not be too impressed. But because I know of the holiness, wisdom, and love of the one who wrote the book and gave the rules, I am going to take the moral commandments of Scripture seriously. I am going to commit myself to them in the confidence that doing so will help make life what it ought to be.

A World in Need of Rules. The Chairman of the Department of Psychiatry at the University of Chicago has said: “Our society and this ‘openness’ have created adjustment problems for the individual. There are fewer of these problems when a society has widely accepted standards for morals and manners. Today, we don’t have such a situation.”

People are happier, more secure, and their lives more manageable when they have some fixed norms and standards to appeal to for direction. The person who lacks a fixed point of integration for his or her behavior is going to be frustrated constantly.

I’m reminded of something Terry and I learned as young parents. When our back yard was enclosed by a fence, our children went to the areas of the yard away from our house…when we lived where there was not a fence, they were not as secure and stayed closer to the house. Rules…norms…restrictions serve the same purpose for us.

Many people refrain from stealing, adultery, murder, or other similar acts not because they fear punishment but because they believe such things are wrong. Internal restraints on behavior are far more powerful than external ones.

God spoke all of this. They are words that God spoke. They are a vision of the kind of people God wants us to be They are God’s hope for us. These ten words describe how a people relate to God and how they relate to one another.

We see how holy God is and we see how we fall short. If we are self-righteous, these Ten Words show us that we are not nearly as righteous as we think. People often look over these Ten Words and ask, “Which of the commandments have I broken?” But that’s the question we ask if we view these ten words as a set of rules carved in stone, when we understand that “God spoke all of this” then we realize that WE ARE broken.

But the gospel of these Ten Words is that God is not going to leave us broken. God spoke all of this in order to draw a broken humanity closer to Him. God really intends for us to live differently. He knows that we can do better and mature. It seems impossible, but with God all things are possible.

A man and his ne’er-do-well son went deep-sea fishing. When they started back toward the shore after dark, the older man was exhausted from the day. So he turned the boat over to his son and lay down to catch a nap on the boat. Before going to sleep, he showed the boy the North Star and told him how to keep the boat on course by navigating with it. No sooner had the father gone to sleep than the son decided to catch forty winks himself. When he woke up, however, he was frightened to discover that the boat had turned out to sea. They were lost, and the boy had no idea of how to reorient himself and get back to land safely.

He rushed over to where his father was sleeping, shook him by the shoulders, and said, “Dad, wake up! You’ve got to show me another star. We’ve run clean past that first one you showed me!”

You don’t run past the North Star in this hemisphere, although you can lose sight of it and get lost. In the same way, you don’t run past the Ten Commandments in charting a course for your moral and spiritual life. You may take your eyes off them and get terribly lost on an uncharted ocean of sin!

In this series of studies, no “new star” for our guidance is going to be identified. There will be an effort made to redirect our attention to the place where it should have been all along. We have been asleep! We have gotten our eyes off the North Star for right living! It is high time that we refocus our attention on the words of the Almighty and chart a life course by them.

Posted by Gary Davenport on January 4, 2016 in Sermon

← It IS a wonderful life!
Discipleship →