Words To Live By Series #10 Respect the truth: Say what really happened 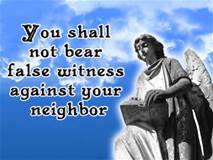 “You shall not bear false witness against your neighbor” (Exodus 20:16)

If we have learned anything about communication over the centuries it is that even when we strive to convey a given truth, it often comes out somewhat distorted. The well‑known party game of “gossip” is but another evidence of the same phen-omenon.

In this message we are studying the Word to Live By, which states: “You shall not bear false witness against your neighbor” (Exod. 20:16; Deut. 5:20). Technically, this is not a prohibition of lying in general, but of that “false testimony” which is given in a court of Law, by which another is either convicted or found innocent.

In 1981, Janet Cooke of the Washington Post was awarded a Pulitzer Prize for her moving account of an eight-year old boy hooked on heroin given him by his mother’s boyfriend. A few days later, the story was exposed as a hoax and fabrication.

The Pulitzer was returned, Miss Cooke resigned her position, and the integrity of the journalistic profession was called into question.

Perhaps the saddest thing about such an episode is the way it was greeted by the public. There was a brief, pious outcry, followed by the comment that probably all our news is manipulated, all statistics are shaded, no public figures are credible, etc. According to a study from Cambridge Survey Research, 69 of every 100 Americans believe our nation’s leaders have consistently lied to them over the past ten years. We are becoming altogether cynical about being lied to!

When God created Adam and Eve He gave them the gift of speech, which was one of the ways He distinguished them from the rest of His creatures. It was not long after the fall that falsehood raised its ugly head in the Scriptures. It is appropriate that the first falsehood in the Bible should be spoken by Satan, the “father of lies” (8:44). He assured Eve that partaking of the forbidden fruit would not result in death, as God had said (Gen. 3:4).

Joseph’s brothers deceived Jacob, their father, into thinking he had been killed by a wild animal (Gen. 37:20, 32‑33). The midwives were not completely truthful with Pharaoh, when he asked why the Hebrew boy babies were not put to death (Exod. 1:18‑19). Moses was not forthright with his father-in-law about his reasons for returning to Egypt (Exod. 4:18).

As surely as one commits himself to a policy of total truthfulness, someone will ask about exceptional cases which seem (to some) to justify lying. What about Rahab protecting the spies at Jericho by hiding them and lying to the police about their whereabouts?

Joshua 2:1-7 (ESV)
1  And Joshua the son of Nun sent two men secretly from Shittim as spies, saying, “Go, view the land, especially Jericho.” And they went and came into the house of a prostitute whose name was Rahab and lodged there.
2  And it was told to the king of Jericho, “Behold, men of Israel have come here tonight to search out the land.”
3  Then the king of Jericho sent to Rahab, saying, “Bring out the men who have come to you, who entered your house, for they have come to search out all the land.”
4  But the woman had taken the two men and hidden them. And she said, “True, the men came to me, but I did not know where they were from.
5  And when the gate was about to be closed at dark, the men went out. I do not know where the men went. Pursue them quickly, for you will overtake them.”
6  But she had brought them up to the roof and hid them with the stalks of flax that she had laid in order on the roof.
7  So the men pursued after them on the way to the Jordan as far as the fords. And the gate was shut as soon as the pursuers had gone out.

We see this story of Rahab and the Jewish spies in her city. Read the story closely, and you will discover that she is nowhere commended for her lies. Hebrews 11:31 (ESV) By faith Rahab the prostitute did not perish with those who were disobedient, because she had given a friendly welcome to the spies.

Here was a pagan woman who recognized that the God of the Hebrew people was the true God. In spite of her immoral sex life and her willingness to play fast and loose with the truth, God saved her. He did not commend her for either of her sinful activities.

The truth question can be discussed under two major headings: (l) factual truth and (2) moral truth.

Factual truth has to do with the accuracy of statements in relation to the state of affairs they purport to identify. A statement is judged true if what is said really does represent the state of affairs to which it refers. The statement “That new car is John’s” is a true statement if the car referred to really does belong to John; otherwise it is false. The statement “Jesus is the Son of God” is true if and only if Jesus really is who he claims to be and false otherwise.

But there is another way to approach the subject of truth, and that is in terms of moral truth. This has to do with one’s honesty in telling the truth and not withholding what he believes to be the facts of a matter.

Someone tells a caller on the phone “Gary isn’t here”; Gary is present and looking him in the eye, but he knows Gary doesn’t want to talk to the person calling.

Perjury. The most obvious application of the ninth commandment in its context is its prohibition of perjury. For one to hear “false witness” is to give false testimony in any sort of civil hearing. Under the Law of Moses, a stiff penalty was imposed on anyone who perjured himself in a formal hearing. Deut. 19:15-19 makes it plain that the court was to impose on any perjurer the sentence his lie would have brought to the accused person. “If the witness is a false witness and has accused his brother falsely, then you shall do to him as he had meant to do to his brother.”

If a man bore false testimony in a murder trial and was discovered, he would pay with his own life, for death is the penalty his lie would have brought on an innocent person. If he charged someone with stealing another man’s sheep, he would have to restore the stolen property at the rate of four sheep for each one missing, for that penalty would have been imposed on an innocent man if his lie had gone undetected.

Silence before lies. It also condemns allowing false reports to go unchecked. It is a form of bearing false witness against one’s neighbor to allow falsehoods about that neighbor to be told without challenge.