RSS
← A study of Forgiveness: The Need to Forgive…Is He Talking To Me?
Being Committed to God →

We Need to Commit: Choose one chair

A chicken and a pig were walking down the road together. They passed a sign for a local diner advertising its breakfast special: “Ham and Eggs – only $2.95!” The chicken said, “That’s our whole contribution to society: breakfast food!” The pig replied, “For you, it may be a contribution. For me, it’s a total commitment.”
Life in the modern world has programmed us to expect a life of ease. It’s not merely that we want everything to be easy; who wouldn’t want that? What is troubling is that we now expect to receive abundant rewards with minimal effort.

If something requires effort or time, it must not be meant to be, and we feel thoroughly justified giving up. 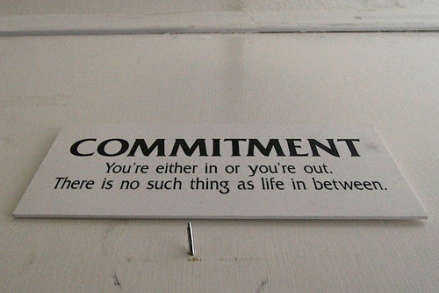 Worse yet are those who believe legitimate goals may be sought through illegitimate means, provided that those means offer a short-cut to the goal in mind.

Take, for example, the professional athlete who chooses to illegally enhance his performance through the use of steroids. Not only has he cheapened himself, he has robbed his fellow athletes of any kind of fair competition. He does this simply because he does not want to put in the time and effort necessary to better himself.

How many of us REALLY believe that you can get something valuable for nothing?

Common sense reveals that some of the best things in life demand effort and prove worthy of whatever amount of labor we endure in the pursuit.

Of course, this is nothing new. Thousands of years ago, God asked, “Who is he who will devote himself to be close to me?” (Jeremiah 30:21). We don’t want to hear it, but the fact of the matter is that following God involves sacrifice, effort, devotion.

Nike’s famous slogan “Just Do It” doesn’t really mean, “Just run 100 miles every week like marathon runners do.” “Just Do It” means, “Just buy the shoes – swift feet sure to follow.”[2] As if you’ll become magically fit simply by purchasing the proper footwear.

Leaders know the truth of Theodore Roosevelt’s words: “Far better it is to dare mighty things, to win glorious triumphs even though checkered by failure, than to rank with those poor spirits who neither enjoy nor suffer much because they live in the gray twilight that knows neither victory nor defeat.”

Godly men and women understand that effective leadership flows from being deeply committed to the right things. As followers of Christ, the single most important commitment of our lives is, obviously, to God. Any lasting success we experience as leaders will flow from that commitment. This is why the apostle Paul writes:

Therefore, I urge you, brothers, in view of God’s mercy, to offer your bodies as living sacrifices, holy and pleasing to God – this is your spiritual act of worship. Do not conform any longer to the pattern of this world, but be transformed by the renewing of your mind. Then you will be able to test and approve what God’s will is – his good, pleasing and perfect will. — Romans 12:1-2

We sacrifice our selfish desires and misguided ambitions as we strive to align ourselves with God’s will. Once this act of commitment occurs, our talents and dreams will be surrendered to his purpose. And the more we give ourselves to him, the more he will bless and use us.

We naturally expect people to conform to their environment. The phrase most often used in this vein is, “When in Rome, do as the Romans do.” Those of us who have been justified, sanctified and consecrated to God, however, face a different set of expectations. People who have received God’s grace and been transported out of darkness into his kingdom of marvelous light will be shaped and molded by their new experience. Such an overwhelming experience is bound to have some impact on our lives. That is only logical, isn’t it?

The God Who Commits

Douglas Rumford makes a profound statement in his book Soul Shaping. He writes, “We make our commitments, then our commitments make us. Once they are chosen, many other choices follow as a matter of course.”[3]

Once we commit to follow Jesus, many other decisions in life must fall into line or we overturn our prior commitment.

But how are we to know that our commitment to God will be honored? All of the commitments we make should flow from the commitment God has first made to us. Once God committed himself to our highest good, his will toward us was sealed. God tells us that he is committed to all who are in Christ, and that our relationship with him will last forever. Jeremiah 31:31-36 shows us the covenant of commitment the Lord made with his people:

“This is the covenant I will make with the house of Israel after that time,” declares the Lord. “I will put my law in their minds and write it on their hearts. I will be their God, and they will be my people. No longer will a man teach his neighbor, or a man his brother saying, ‘Know the Lord,’ because they will all know me, from the least of them to the greatest,” declares the Lord. “For I will forgive their wickedness and will remember their sins no more.”

This is what the Lord says, he who appoints the sun to shine by day, who decrees the moon and stars to shine by night, who stirs up the sea so that its waves roar – the Lord Almighty is his name: “Only if these decrees vanish from my sight,” declares the Lord, “will the descendants of Israel ever cease to be a nation before me.”

In spite of the rebelliousness of the people of Judah, the Lord assured them through the prophet Jeremiah that he was committed to their ultimate good. Judgment was inevitable because they had flagrantly violated God’s commands, but the prophet looked beyond this impending condemnation to a time of consolation. There will be a faithful remnant, and God’s people will eventually enjoy the blessings of forgiveness and complete renewal.

In this covenant, God commits himself to the welfare of the house of Israel and Judah and predicts a time when they will all know him and when his law will be written on their hearts. “‘For I know the plans I have for you,’ declares the Lord, ‘plans to prosper you and not to harm you, plans to give you hope and a future’” (Jeremiah 29:11).

God’s grace is always previous to our response and demonstrates his unshakeable commitment to us. “This is how God showed his love among us: He sent his one and only Son into the world that we might live through him. This is love: not that we loved God, but that he loved us and sent his Son as an atoning sacrifice for our sins” (1 John 4:9-10). When we love God, it is “because he first loved us” (1 John 4:19).

Lewis Thomas, scientist and philosopher, described humans best when he said, “We are, perhaps, uniquely among earth’s creatures, the worrying animal. We worry away our lives, fearing the future, discontent with the present, unable to take in the idea of dying, unable to sit still.”[4]

“When Luciano Pavarotti was a boy, his father, a baker, introduced him to the wonders of song. “He urged me to work very hard to develop my voice.

Arrigo Pola, a professional tenor in my hometown of Modena, Italy, took me as a pupil. I also enrolled in a teachers college. On graduating, I asked my father, ‘Shall I be a teacher or a singer?’

“‘Luciano,’ my father replied, ‘if you try to sit on two chairs, you will fall between them. For life, you must choose one chair.’ “I chose one. It took seven years of study and frustration before I made my first professional appearance. It took another seven to reach the Metropolitan Opera. And now I think whether it’s laying bricks, writing a book—whatever we choose—we should give ourselves to it. Commitment, that’s the key. Choose one chair.”

Posted by Gary Davenport on March 6, 2019 in Encouragement

← A study of Forgiveness: The Need to Forgive…Is He Talking To Me?
Being Committed to God →