Searching for direction…It involves a decision…and some planning. At the spiritual level, planning means taking the initiative.

A man called his neighbor to help him move a couch that had become stuck in the doorway. They pushed and pulled until they were exhausted, but the couch wouldn’t budge.  “Forget it,” the man finally said.  “We’ll never get this in.” The neighbor looked at him quizzically and said, “In?”

Is it possible that Time magazine was right when they described the Bible as a book “more revered than read”?

The Bible needs to be treasured, but more than that it needs to be internalized. It provides the eternal road-map to heaven, which certainly ought to be the direction we’re wanting to travel. 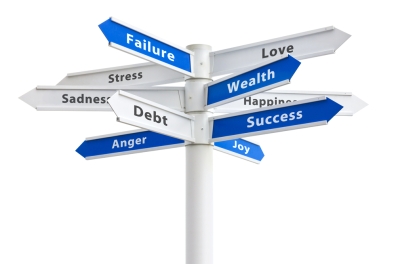 There is something wonderful about a beaten-up heavily marked, tattered Bible. Madeleine Delbrel, the French activist who lived a little more than a generation ago, stuffed her Bible with snapshots, clippings, ticket stubs, postcards and other detritus to remind her that she was praying in the world of people and events. She called these scraps “icons of humanity” that prompted one to celebrate the “liturgy of life.”

It involves a decision…and some planning. At the spiritual level, planning means taking the initiative. It’s not about sitting around until you are absolutely certain God is calling you to a particular task, direction, country, or ministry. Nor is it waiting for the doors to open so you can go there easily. Planning is an act of faith. Jesus never told his disciples to wait for an invitation. He told them to go. [1]

We must realize that you cannot pull people uphill who do not want to go; you can only point up.  We must come to see each day as David Brainerd saw it: “As long as I see anything to be done for God, life is worth having; but O how vain and unworthy it is to live for any lower end!”

Dr. Reid Vipond of Canada shares a story of an oil company that needed a suave public-relations man for its office in the Orient. After interviewing several candidates, the officials decided to ask a local missionary to take the position. Company executives met with this man of unusual gifts. Whatever their proposition, his answer was always “No.” “What’s wrong?” asked one interviewer. “Isn’t the salary big enough?” The missionary replied, “The salary is big enough, but the job isn’t.”

Duke’s basketball coach, Mike Krzyzewski, gave a great talk to the University Retirees Association. He told them about a friend of his in Southern California who was coaching a basketball team where out of 15 of the young men, 10 had never known a father.  He noted how he and his fellow coaches were spending more time trying to be daddies to their players than coaches.

Then Krzyzewski said, “Things are in too big a mess in the American family for you people to be sitting around playing bridge, or moving to some retirement community in Florida.  We need you.  We need your wisdom, your patience, your free time.  We need you to be adopting kids, stepping up and taking responsibility for kids that, while they may not be your own, they are all of our responsibility.”

Posted by Gary E. Davenport on April 11, 2019 in Encouragement