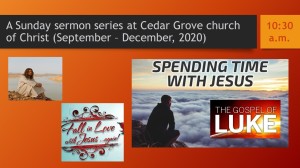 Three “Great Miracles” described in scripture shape the Christian’s understanding of God. Each of these three grand miracles have been challenged by non-believers and even watered down by some believers.

The most insidious and damaging ideology ever foisted upon the mind of modern man is the notion that human beings are but animals, and the offspring of other, more primitive creatures. It’s known as the theory of organic evolution.

Tragically, multiplied thousands across the land have ingested this dogma. Evolution is not a scientific law. It is a mere hypothesis that falls quite beyond the pale of the scientific method, which should include observation, experimentation, and verification.

Many scientists dispute that evolutionary dogma is true science. Evolutionist Robert Jastow has conceded that belief in the accidental origin of life is “an act of faith much like faith in the power of a Supreme Being.”

Theodore Tahmisian, a nuclear physicist with the Atomic Energy Commission, has said: “Scientists who go about teaching that evolution is a fact of life are great con men, and the story they are telling may be the greatest hoax ever. In explaining evolution we do not have one iota of fact … It is a tangled mishmash of guessing games and figure jaggling … If evolution occurred at all, it was probably in a very different manner than the way it is now taught”.

(Gen 1:1 NIV)  In the beginning God created the heavens and the earth.

(Gen 1:2 NIV)  Now the earth was formless and empty, darkness was over the surface of the deep, and the Spirit of God was hovering over the waters.

How does God reveal Himself?  Through scripture…through our conscience…through the indwelling Holy Spirit. But it begins for many through nature.

(Psalms 19:1-6)  “The heavens declare the glory of God; the skies proclaim the work of his hands. {2} Day after day they pour forth speech; night after night they display knowledge. {3} There is no speech or language where their voice is not heard. {4} Their voice goes out into all the earth, their words to the ends of the world. In the heavens he has pitched a tent for the sun, {5} which is like a bridegroom coming forth from his pavilion, like a champion rejoicing to run his course. {6} It rises at one end of the heavens and makes its circuit to the other; nothing is hidden from its heat.

(Romans 1:20) For since the creation of the world God’s invisible qualities–his eternal power and divine nature–have been clearly seen, being understood from what has been made, so that men are without excuse.

In the Bible God tells us what He is like. We learn how He thinks, how He feels, and how we can expect Him to act.

If we want to know God, we must begin by opening the Bible and reading what He has to say about Himself.

But God is infinite, and we are finite human beings. How can the finite ever really understand the infinite? How can the human ever truly know the divine?

It seems that God must reveal Himself to us in some way more personal than mere written words if we are ever to know Him genuinely.

And that is exactly what He did through Jesus Christ.

(John 1:14-18)  The Word became flesh and made his dwelling among us. We have seen his glory, the glory of the One and Only, who came from the Father, full of grace and truth.

(Hebrews 1:1-3)  In the past God spoke to our forefathers through the prophets at many times and in various ways, {2} but in these last days he has spoken to us by his Son, whom he appointed heir of all things, and through whom he made the universe. {3} The Son is the radiance of God’s glory and the exact representation of his being, sustaining all things by his powerful word. After he had provided purification for sins, he sat down at the right hand of the Majesty in heaven.

Jesus Himself made that claim when He said: If you had known Me, you would have known My Father also; from now on you know Him, and have seen Him. (John 14:7).

The miracle of Jesus’ Birth.

Biblical names frequently have a profound theological meaning. For instance, in Isaiah 7:14 the prophecy was given: “Therefore the Lord himself will give you a sign: behold, a virgin shall conceive, and bear a son, and shall call his name Immanuel.”

The name “Immanuel” in Hebrew means “God is with us,” and the prophecy finds its fulfillment in the birth of Jesus Christ.

By the use of  “Immanuel,” at least two things are in view:

First, that Jesus is a divine being; he is God.

Second, there is the implication that in some way Deity has identified “with us.”

The Bible teaches that the divine Christ sustains the very universe in which we live. In that great chapter which is designed to exalt the Lord, Paul affirms that in Christ “all things consist” (Col. 1:17).

Though Christ was existing eternally as Deity, yet it was the divine plan that he become human. So in the fulness of time the “seed” of woman came to earth (cf. Gen. 3:15; Gal. 4:4).

In order that he might identify with us, Jesus came “in the likeness of sinful flesh” (Rom. 8:3).

Through his vicarious death

The identification of God the Son with us in his death is vividly stressed in Isaiah 53. Note the interchange of pronouns:

“Surely he hath borne our griefs, and carried our sorrows…he was wounded for our transgressions, he was bruised for our iniquities; the chastisement of our peace was upon him; and with his stripes we are healed” (Isa. 53:4-5).

“Him who knew no sin he [God] made to be sin on our behalf, that we might become the righteousness of God in him” (2 Cor. 5:21). The death of Christ is given a very prominent place in the Bible.

The Scriptures are filled with promises that God will be with his saints on a daily basis. “Jehovah of hosts is with us” (Psa. 46:7).

The resurrection of Jesus from the dead is the foundation of the Christian system (cf. 1 Cor. 15:14ff). If there was no resurrection, Christianity is a hoax, and we are wasting our time. But the truth is, the event of Jesus’ resurrection is incontrovertible.

First, the resurrection is one of the major evidences that Jesus Christ is the Son of God.

Paul affirmed that Christ is “declared to be the Son of God with power … by the resurrection from the dead” (Rom. 1:4).

Second, Jesus’ resurrection represents an assurance that we can have forgiveness from our sins.

Third, the resurrection tells the world that the kingdom of God is ruled by a living sovereign.

The founder of Islam is dead and his bones lie dormant in the earth. But the founder of Christianity – sixty years after His death – appeared to John on the island of Patmos and said: “I am the first and the last, and the Living one … I was dead, and behold, I am alive for evermore …” (Rev. 1:17-18).

Fourth, Jesus’ resurrection proves that physical death is not the termination of human existence.

God, who is the giver of life (1 Tim. 6:13), has the power to reanimate the human body. Christ’s triumph over the grave is Heaven’s pledge to us that we too shall be raised. This is why Jesus is referred to as the “firstfruits of them that are asleep” (1 Cor. 15:20, 23).

Fifth, the Lord’s resurrection previewed the ultimate victory of Christianity over all its enemies.

In the book of Revelation, Jesus is depicted as a lamb that had been slain, but was standing again (5:6). This same Lord was “the lion of the tribe of Judah” that had overcome His foes (5:5).

Christians too will overcome as a result of the Lamb’s sacrifice and victory over death (cf. Rev. 12:11).

Creation…the Incarnation…the Resurrection. They are facts upon which our faith is based. I am thankful we possess this information!