A study of Romans: The Righteousness of God #15 The Law Principle and the Gospel – Romans 7:1-6 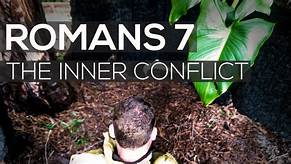 Something in human nature makes us want to go to extremes, a weakness from which Christians are not wholly free. “Since we are saved by grace,” some argue, “we are free to live as we please,” which is the extreme of license.

“But we cannot ignore God’s Law,” others argue. “We are saved by grace, to be sure; but we must live under Law if we are to please God.” This is the extreme expression of legalism.

My greatest need is to be right with God. If I am to have that need met, three other needs must also be met. Romans 7 begins with Paul giving us this direction: the need to be forgiven, the need to be changed, and the need to win the victory over the flesh.

Every growing Christian understands the experience of Romans 6 and 7. Once we learn how to “know, reckon, and yield,” we start getting victory over the habits of the flesh, and we feel we are becoming more spiritual. We set high standards and ideals for ourselves and for a while seem to attain them.

Then everything collapses! We start to see deeper into our own hearts and we discover sins that we did not know were there. God’s holy Law takes on a new power, and we wonder if we can ever do anything good! Without realizing it, we have moved into “legalism” and have learned the truth about sin, the Law, and ourselves.

What really is “legalism”? It is the belief that I can become holy and please God by obeying laws. It is measuring spirituality by a list of do’s and don’ts. The weakness of legalism is that it sees sins (plural) but not sin (the root of the trouble). It judges by the outward and not the inward. Furthermore, the legalist fails to understand the real purpose of God’s Law and the relationship between Law and grace.

These verses actually continue the discussion that Paul began in Romans 6:15, answering the question, “Shall we sin because we are not under the Law, but under grace?” He used the illustration of a master and servant to explain how the Christian should yield himself to God.

In this passage he used the illustration of a husband and wife to show that the believer has a new relationship to the Law because of his union with Jesus Christ.

7:1 The law has authority over a man only as long as he lives.NIV Paul continues his thought from 6:14, “For sin shall not be your master, because you are not under law, but under grace.”

Obviously, the law has authority only while someone is alive—a dead body cannot be expected to follow any laws, nor can it make restitution for sins committed. Paul’s word for has authority includes the idea of the “master”—literally, “The law lords it over a person.”

7:2 For a married woman is bound by law to her husband while he lives, but if her husband dies she is released from the law of marriage.

The illustration is a simple one, but it has a profound application. When a man and woman marry, they are united for life. Marriage is a physical union (“They two shall be one flesh” Gen. 2:24) and can only be broken by a physical cause. One such cause is death. (Matt. 5:31-34; 19:1-12 indicate that unfaithfulness also breaks the marriage bond, but Paul does not bring this up. He is not discussing marriage and divorce; he is using marriage to illustrate a point.)

As long as they live, the husband and wife are under the authority of the law of marriage. If the woman leaves the man and marries another man, she commits adultery. But if the husband dies, she is free to remarry because she is no longer a wife. It is death that has broken the marriage relationship and set her free.

The marriage vows bind a woman to her husband while he lives. If he dies, she is free from her vows to him.

Paul uses marriage to illustrate our relationship to the law. When a spouse dies, the law of marriage no longer applies. Because we have died with Christ, the law can no longer condemn us. We rose again when Christ was resurrected, and now we belong to Christ. His Spirit enables us to produce good fruit for God. The result is that we serve God, not by trying hard to obey a set of rules, but out of renewed hearts and minds that overflow with love for him. Why do you serve God?

If the wife leaves her husband for another man, she is called an adulteress (except for the provisions described in Matthew 19:9 and 1 Corinthians 7). The Greek word for called means “to be publicly known as” or “to receive the stigma of.” If this woman is widowed, she is free to marry another man and not be an adulteress.

Again, Paul was having to put this in “human terms” (6:19), by developing an analogy from common living to emphasize his lesson. Having begun the theme of marriage, Paul wants his readers to remember that under normal circumstances any breaking of the marriage vows would be adultery. Having stated that fact, Paul explains its significance.

7:4  Likewise, my brothers, you also have died to the law through the body of Christ, so that you may belong to another, to him who has been raised from the dead, in order that we may bear fruit for God.

Just as death breaks the bond between a husband and wife, so a believer’s “death” (death to his old self) breaks his bond with the law. The old contractual arrangement had to be completely severed before the new one could begin. This had to be as final as death.

Jewish believers could not live with a dual allegiance. They could not be under the lordship of Christ and the lordship of the law. Total commitment to Christ cannot coexist with a total commitment to the law. That would be spiritual adultery. A believer belongs fully to Christ. This happens through the body of Christ, that is, because of Christ’s death on the cross. The believer is then freed to belong to another, to Christ.

Bear fruit to God.NKJV Just as there is fruit (i.e., children) from a marriage, so there is fruit from our relationship with Christ. In 6:20-21, Paul reminded the Romans that their old life had borne fruit that was reason for shame. But now there are prospects for a harvest of good. Only by belonging to Christ can we do good works and live a life pleasing to God. This is how we serve in the new way of the Spirit (7:6).

Paul is drawing a contrast between the two states of man—without Christ and with him. Before we knew Christ we tried to rule life by obedience to the written code of the law. That was when we were in the flesh. By the flesh Paul does not mean simply the body, because a man retains a physical body to the end of the day. In man there is something which answers to the seduction of sin; and it is that part of man which provides a bridgehead for sin that Paul calls the flesh.

The flesh is human nature apart from and unaided by God. Paul says that, when our human nature was unaided by God, the law actually moved our passions to sin. What does he mean by that? More than once he has the thought that the law actually produces sin, because the very fact that a thing is forbidden lends it a certain attraction. When we had nothing but the law, we were at the mercy of sin.

Then Paul turns to the state of a man with Christ. When a man rules his life by union with Christ he rules it not by obedience to a written code of law which may actually awaken the desire to sin but by an allegiance to Jesus Christ within his spirit and his heart. Not law, but love, is the motive of his life; and the inspiration of love can make him able to do what the restraint of law was powerless to help him do.

7:5 5  For while we were living in the flesh, our sinful passions, aroused by the law, were at work in our members to bear fruit for death.  or, “When we were in the flesh.” Paul reminds his readers that the law did little more for them than fuel their passion for sin. They were under the authority of the law, but they disobeyed it. In the New Testament, when Paul used the term flesh (sarx), translated here as sinful nature, he had two concepts in mind: (1) basic humanity, or the mortal body (see 2 Corinthians 4:11; 10:3; Galatians 2:20; Philippians 1:22, 24), and (2) the human tendency to be dominated by desire and sin (see 8:7; Galatians 3:3, 5:24). Here, Paul is using the second meaning.

Bear fruit for death.NRSV The only fruit produced by a life that is under the law is sin and death. Why? Because sinful passions aroused by the law were at work in our bodies.NIV

The law restrains us and teaches us God’s will, but it also reveals and stimulates our sinful nature. At the same time it identifies sin, it also generates sin.

Paul expands on these thoughts at length in verses 7-13.

7:6  But now we are released from the law, having died to that which held us captive, so that we serve in the new way of the Spirit and not in the old way of the written code.

This statement anticipates the spiritual solution to the problems Paul will address in this chapter. Because we have been released from the law, we no longer Wave to obey in the old way of the written code.NIV In other words, the law is not erased, but it is no longer to be obeyed on the superficial level of “works” (the way of obedience familiar to the Jews).

Nor are we freed from all responsibility to serve. God still desires our moral obedience, but we are to serve Christ out of love as our chosen master. Our focus should be on his desires, not on a list of commands. We have been released so that we can serve in the new way of the Spirit living within us, guiding us, and showing us how to please God. We are still called to serve, but our master is gracious, and we are no longer trapped by the cycle of effort, failure, and guilt.

We are delivered from Law (v. 6). This is the logical conclusion: the Law cannot exercise authority over a dead person. The Authorized Version reads as though the Law died; but Paul wrote, “We having died to that wherein we were held.” Death means deliverance (note Rom. 6:9-10).

This truth refutes the false accusation that Paul taught lawlessness. What is different about Christian service as opposed to our old life of sin? To begin with, the Holy Spirit of God energizes us as we seek to obey and serve the Lord. (The word spirit ought to be capitalized in Romans 7:6—”newness of Spirit.”)

Under Law, no enablement was given. God’s commandments were written on stones and read to the people. But under grace, God’s Word is written in our hearts (2 Cor. 3:1-3). We “walk in newness of life” (Rom. 6:4) and serve “in newness of Spirit.” The believer, then, is no longer under the authority of the Law.