A study of Romans: The Righteousness of God #20 Wasted Opportunities – Romans 9:1-5 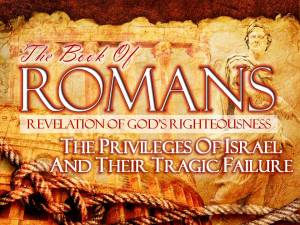 Chapter 9 of Romans has as its theme, “Wasted Opportunities,” which we will explore today.

Paul has developed the great doctrine of sanctification. justification and glorification in the first 8 chapters of Romans. This section reaches a climax in Romans 8 as he shows us the great blessings of being in Christ Jesus.

When we study carefully the first 8 chapters of Romans, we conclude that the only reasonable response to what God has done is to throw ourselves before God and give Him the best we have because He has given us the best He has.

But before Paul moves on to address practical concerns of local church life (in chapters 12-15), he feels compelled to speak about God’s plan for the Gentiles and the Jews, Paul’s very own people.

If the Jews were God’s chosen people, why did most of them oppose the gospel? If the gospel really is the fulfillment of the Hebrew Scriptures, why don’t the Jews recognize it as such? And how does one make sense of God’s choice of Israel and his promise to bless the world through them when the Jews had rejected the gospel?

Paul completely understood the feelings of the Jews who refused to accept Jesus as their Messiah—he had once been so opposed to Christ that he had hunted down and imprisoned Christians. But then Paul was confronted by Christ and became a changed man.

Paul knew that the church at Rome had a unique opportunity to use the diverse personal backgrounds of its members to strengthen the cause of Christ. Paul tackled many of the issues in this letter for the sake and unity of both Jewish and Gentile Christians.

Romans 9:1-3 (ESV) I am speaking the truth in Christ—I am not lying; my conscience bears me witness in the Holy Spirit— that I have great sorrow and unceasing anguish in my heart. 3 For I could wish that I myself were accursed and cut off from Christ for the sake of my brothers, my kinsmen according to the flesh.

9:1 My conscience confirms it by the Holy Spirit.NRSV Paul uses conscience to refer to that inner prompting that confirms or disapproves of our conduct. Believers should have well-tuned consciences because they also have the Holy Spirit within. The words Paul would write bear the truth—he is not lying, as his conscience confirms. Paul reveals his depth of feeling here; as the apostle to the Gentiles, with his great zeal for preaching to the Gentiles, he was probably often accused of turning his back on his own people.

9:2 Great sorrow and unceasing anguish.NRSV Despite his great success as a missionary to the Gentiles, a church planter, and a writer of letters of teaching and assurance to those churches, Paul still feels great sorrow. Most of the Jews, his people, the chosen people of God, were rejecting the gospel. The Jews should have been the first to recognize the gospel as the promised fulfillment of their Scriptures, but somehow they missed it. They were missing out on salvation, and this hurt Paul deeply.

Though his commission to preach the gospel took him outside Jewish boundaries, Paul never lost his love for his Jewish brothers and sisters. In his travels for the gospel, Paul always kept the door of the gospel open to those from his own race.

9:3 I could wish that I myself were accursed.NKJV Anathema.

It is remarkable how Paul moved from the joy of Romans 8 into the sorrow and burden of Romans 9. When he looked at Christ, he rejoiced; but when he looked at the lost people of Israel, he wept. Like Moses (Ex. 32:30-35), he was willing to be cursed and separated from Christ if it would mean the salvation of Israel.

Paul has just written of the dependability of God’s love (8:35-39); here he expresses desire that his people could take his place in knowing God. Paul knew that it was only a short step of faith from all the past blessings the Jews already had to the infinitely greater gift that God wanted to give them.

These address the privilege of the Jews. The privilege simply stated is this: For fifteen hundred years, the nation of Israel had been God’s chosen people. He had chosen them not because they  were  the  greatest  of  all  nations….He chose them when they were no nation at all.

He had brought their fathers out of the land of Egypt from the house of bondage; He had nurtured them under Moses in a wilderness for 40 years. He had given them a written law by which to live, the heart of which was the Ten Commandments.

All of the land promises were fulfilled to Israel. Before Joshua’s death he called the people of Israel together and said, “Not one good thing of all the things that God has promised to us has failed; all have been fulfilled.” They possessed the land, and they dwelt in it.

God nurtured them through ups and downs until finally, in cooperation with God, Jesus of Nazareth came into the world through his nation.

According to Galatians 4:4, in the fullness of time “God sent forth His Son, born of a woman, born under the Law.” Jesus was a part of Israel. That is one of the reasons God kept the nation intact. The Messiah was the God-man, the perfect combination of deity and humanity.

When He came He was born miraculously. Mary, His mother, was with child of the Holy Spirit. No man was His father. Jesus’ deity was demonstrated by His perfect life, the way He taught. His miracles, and the voice of God which spoke three times from heaven designating Him as God’s only begotten Son.

The supreme evidence of who He was came when He was crucified on a Roman cross between two thieves and on the third day arose. I believe Him to be all that He claimed to be. Faith is not a leap into the dark, for faith is based upon evidence. He came and demonstrated who He is.

When the church He promised to build came into existence on the first Pentecost following Jesus resurrection, three thousand of Israel were obedient to the faith. Soon that number grew to five thousand. Luke tells us that the disciples were multiplied. The good news of Jesus was first preached to Israel, and the first followers of Christ were Israelites.

When Paul develops his theme in Romans, he shows us that men who were of the Gentile people stood in the presence of God undone and lost because even though they did not have a written law from God, they rejected the light that God gave them.

Adoption Number one is found at verse 4. He says,“Who are Israelites, to whom belongs the adoption.” Adoption. God had adopted the nation of Israel to be His own people. He said through His prophet Hosea, “Out of Egypt I have called my son.” In Exodus 4:22 God affirmed that He was their God and they were His people.

Glory. The second blessing is “the glory.” They had experienced God’s own glory. First, the glory of God came to the Israelites from Mt. Sinai when He gave the law; but they saw the glory of the law as He led them by the pillar of fire at night and the cloud by day. They saw His glory as it settled upon the tabernacle, their tent of meeting.

The Covenant. There is a third blessing or privilege: “The covenants.” A covenant is an agreement between two parties involving promises. God made covenants with the fathers of Israel and then with

The Law. Next is the giving of “the law.” The blessing of Israel included the law that governed them given at Mt. Sinai.

The Temple Service. Next he says, “And the temple service.” The Levitical service, the service of the priesthood around the tabernacle and later the temple, was theirs.

The Promises. The next word is “the promises.” All the promises pertaining to the coming Messiah were made to the nation of Israel.

The Fathers. A seventh blessing or privilege is “the fathers.” He says, “Whose are the fathers, . . .” He refers to the patriarchs, those who had led the way and blazed the trails.

The Messiah. The eighth blessing is that through Israel “is the Christ according to the flesh, who is over all, God blessed forever.” Jesus was born of the nation of Israel.

After  enumerating  these  wonderful  blessings, we must acknowledge and even be impressed with the wasted opportunities, for the nation rejected Messiah.

CONCLUSION. As long as there have been Scriptures, there have also been those unwilling to submit to the Scriptures’ authority.

Many treat the Bible as an old book, a leatherbound relic to display and keep dusted. Others turn to it only in times of crisis or in church.

But even studying the Bible and knowing it well doesn’t guarantee a right relationship with God. Obedience proves whether or not a person considers the Bible to be, in fact, God’s Word. So people who do not read, study, understand, and obey God’s Word may doubt its power.

But God’s Word never fails, even though some doubt it. If you want to see God’s Word succeed in your life, if you want to experience God’s power, treat the Bible as though it is what it claims to be, the infallible Word from almighty God—read it, study it, understand its principles for living, and apply those truths to your life. In short, do what the Bible says—LIVE it.

To what lengths will we go to offer the gospel to someone else? Paul consistently loved the Jews. They are one group that still needs to hear the gospel. But there are others, too. Sometimes the barriers to overcome are racial, linguistic, or cultural. Other times the distance is nothing more than social or geographical.

Our lack of compassion is directly addressed in Scripture: “if anyone says, ‘I love God,’ yet hates his brother, he is a liar. For anyone who does not love his brother, whom he has seen, cannot love God, whom he has not seen” (1 John 4:20 niv). One of our persistent prayers needs to be for more love.

By way of application I would ask, “What about  us?  What  about  our  privileges?  What about our opportunities?” Let me enumerate three blessings or opportunities that belong to us today.

First, there are family and friends. We are surrounded by people whom we love and by whom we are loved. It is so easy to squander opportunities to speak a word of encouragement, or a word of love. One time Jesus said, “Me you have not always.” That is true of our loved ones and friends. If we are ever going to say, “I love you,” if we are ever going to give a hand to help, we should do it now. We have the opportunity, but the opportunity may be wasted.

Second, there is the call of Christ, which says to all of us, “Come unto Me, and I will give you rest.” Many are still rejecting His call. Others are wanting to accept the call but on the basis of their own terms. Jesus shows that men who are born of the water and Spirit are in His family. We must give serious attention to His call.

Third, there is the opportunity for faithfulness. How many people began to follow Christ and then after a while gave up? In giving up, faithfulness is gone.

You and I are surrounded by opportunities and privileges. We must not waste them. May we give ourselves to the very best that is within us in fulfilling the opportunities we have.

Posted by Gary Davenport on October 21, 2021 in Romans