RSS
← A closer look at the cross: Understanding Temptations
Encounters With God: Jonah, The Prodigal Prophet, Running Away From God – Jonah 1 →

A closer look at the cross of Christ: Tried and Tempted 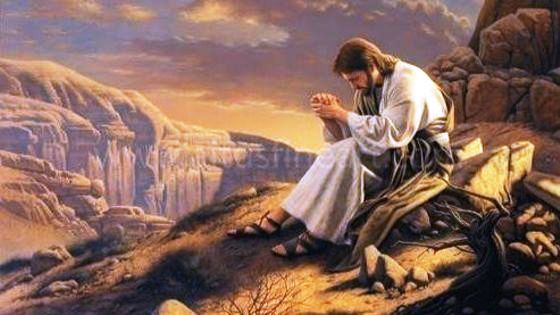 Satan then tempted Jesus (Mark 1:13) by saying to him, “If you are the son of God, command these stones to become loaves of bread” (Matthew 4:3; Luke 4:3).  Jesus resisted Satan’s temptation by quoting Deuteronomy 8:3, “Man shall not live by bread alone, but by every word that proceeds from the mouth of God” (Matthew 4:4; Luke 4:4).

Satan then took Jesus to a very high mountain and showed him all the kingdoms of the world and the glory of them in a moment of time (Matthew 4:8; Luke 4:5).  Satan then said to Jesus, “To you I will give all this authority and their glory, for it has been delivered to me, and I give it to whom I will.  If you, then, will worship me, it shall all be yours” (Matthew 4:9; Luke 4:6-7).

For a third time Jesus resisted Satan’s temptation by quoting scripture, Deuteronomy 6:13, “You shall worship the Lord your God and him only shall you serve” (Matthew 4:10; Luke 4:12).

These verses imply that there had to be other occasions when Satan returned to Jesus to again tempt him.  For this study, we will take a closer look at those other occasions mentioned in scripture when Satan or a person under the influence of Satan, tried to tempt Jesus again.

Question:  When you’re made fun of, laughed at for what you believe or say, and made to believe that you’re wrong, isn’t that a form of temptation?  Don’t you want to immediately verbally or physically strike back at those ridiculing you or just run away and hide?  It wasn’t the unbelieving crowd tempting Jesus, it was Satan.  Satan wanted to plant a seed of doubt and unbelief in Jesus and use peer pressure to drive it home.

These people also asked Jairus, “Why trouble the teacher any further?” (Mark 5:35; Luke 8:49).  Jesus then said, “Do not fear, only believe, and she shall be made well” (Mark 5:36; Luke 8:50).  Then Jesus stopped these people and the great crowd (Mark 5:21) from following him, allowing only Peter, James and John to accompany he and Jairus to his house (Mark 5:37).  When Jesus, Jairus and the three apostles arrived at Jairus’ house, flutists were playing and the crowd was making a tumult, weeping and wailing loudly (Matthew 9:23; Mark 5:38).

Question:  When you become angry at someone, do you become so frustrated and get so out of control that you get sidetracked and forget what you were trying to accomplish?  Does your anger so overtake you that you lose an opportunity to show others the good within you?  It wasn’t the scribes and pharisees tempting Jesus, it was Satan.  Satan wanted Jesus to become so angry that this opportunity to do good would be lost forever.

On several occasions Satan used the religious leaders of the day in efforts to tempt Jesus.  Scripture describes these efforts as attempts “to test, to entangle, to accuse, to put him to the test.”

One example of these attempts occurred when the Scribes and Pharisees questioned Jesus as he taught in the synagogue.  They asked, “Is it lawful to heal on the Sabbath?” (Matthew 12:10).  The purpose of their question was to find an accusation against him (Luke 6:7), for they knew a man with a withered hand was present (Matthew 12:10; Mark 3:1; Luke 6:6).

Did Satan’s temptation of Jesus work?  No it didn’t.  Jesus asked the man to “stretch out your hand” (Matthew 12:13; Mark 3:5; Luke 6:10).  Jesus then restored the man’s right hand and made it whole (Matthew 12:13; Mark 3:5; Luke 6:10).  Jesus had controlled his anger, overcome the temptation, and was able to make the best of an otherwise bad situation bring glory to God.

For additional study, other examples of religious leaders tempting Jesus include:

Question:  What do you do when your closest friend, relative, neighbor, or brother and sister in Christ betray or disappoint you?  Do you disassociate yourself from them and avoid them from then on?  Do you find new individuals to become your closest friends and acquaintances?  Satan wanted to tempt Jesus into thinking that his choices for his apostles had been wrong, that his use of these men in his ministry had been a bad mistake on his part.

Perhaps Satan’s greatest efforts at tempting Jesus occurred when he used those individuals closest to Jesus to tempt him – his own apostles, the men he had hand picked to work along side him in his ministry and after his death, continue the work he had started.

Did Satan’s use of the apostles to tempt Jesus work?  No it didn’t.  Jesus didn’t write off the twelve as wrong choices for apostles.  He didn’t find new individuals to work along side him in his ministry.  Instead, he continued to teach, train, and help the apostles to learn, grow, and mature in his ministry, to develop into the kind of leaders he knew the church would need to grow and multiply following his death.  He didn’t give up on his choices.

Question:  When your life seems to be crumbling in on you, when all hope seems to be gone, when there seems to be no escape from life’s pain and suffering, trials and tribulations, sorrow and agony, where do you turn?  To painkillers?  tranquilizers?  alcohol? drugs?  stimulants?  caffeine?  chocolate?  marijuana?  heroin? opium?  crack?  quaaludes?  valium?  Or some other type of human remedy?  Satan wanted Jesus to take the drugged drink and lessen Jesus’ suffering on the cross.

Satan’s last effort to tempt Jesus, like his first, came at a time when the physical, human side of Jesus was weakest.  It occurred as Jesus hung on the cross.  His physical body had gone without food, drink, or rest for almost 24 hours.  He had been bound at his arrest (John 18:12); spat on, struck and slapped by the Jewish authorities (Matthew 26:67; Mark 14:65; Luke 22:64); his head pierced by the crown of thorns as it was struck by a reed (Matthew 27:29-30; Mark 15:17-19; John 19:2-3); his back torn into shreads from being scourged (Matthew 27:26; Mark 15:15); his body weakened from carrying the weight of the cross (John 19:17); his hands pierced by the spikes that held him to the cross;  his body weakened from loss of blood.  In physical pain and torment that would have already killed many a man, Jesus was tempted one final time by Satan.

As Jesus hung on the cross, a Roman soldier, perhaps, offered him a drink made of wine mingled with myrrh (Mark 15:23) or gall (Matthew 27:34) that had been made by some wealthy Jewish women.  Why was this drink a temptation?  To answer this question, one must take a closer look at the drink that was offered to Jesus.  It was made of gall, a bitter and poisonous herb, that was commonly used to dull a person’s senses and nerves, lessen pain, and hasten death.  It is mentioned in scripture as “poisoned water” (Jeremiah 8:14; 9:15; 23:15), “poisonous weeds” (Hosea 10:4), and “poison for food . vinegar to drink” (Psalm 69:21).  It was a narcotic painkiller.

Perhaps not knowing what was being offered to him, Jesus tasted it (Matthew 27:34).  When it touched his lips and he realized what it was, he would not drink it (Matthew 27:34; Mark 15:23).  To have done so would have lessened Jesus’ pain and agony on the cross, negating everything he had lived for.  Instead of tasting the drink further, Jesus chose instead to taste death for all mankind (Hebrews 2:9).

Did Satan’s effort to tempt Jesus with drugs work?  No it didn’t. When Jesus could have taken drugs to kill his physical pain, end his mental suffering, and hasten death on the cross, he chose to “just say no” to the licit (legal) drug used by the physicians and executioners of his day.  He said no to the drugs and no to Satan. The next time you have a hard day and are tempted to “pop a pill,” take a closer look at the cross.

← A closer look at the cross: Understanding Temptations
Encounters With God: Jonah, The Prodigal Prophet, Running Away From God – Jonah 1 →