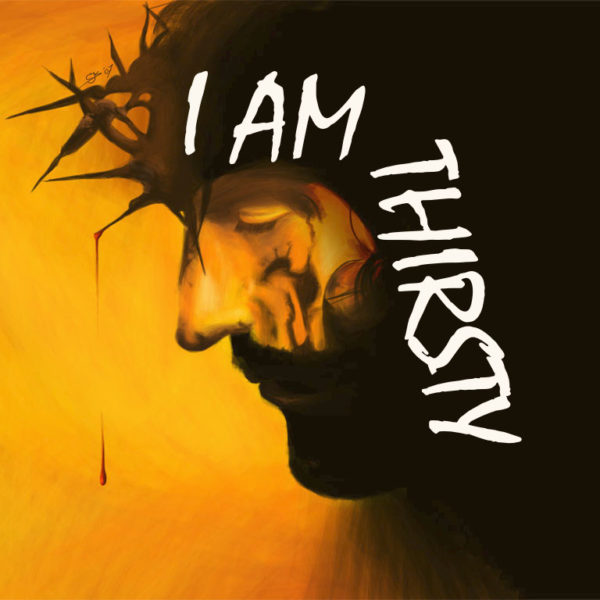 “Later, knowing that all was now completed, and so that the Scripture would be fulfilled, Jesus said, “I am thirsty” (John 19:28).

Of old the Spirit of God moved David to say of the coming Messiah: (Psalms 69:21 NIV)  They put gall in my food and gave me vinegar for my thirst.

How marvelously complete was the prophetic sayings! No essential item was missing from it. Every important detail of the great tragedy had been written down beforehand.

All plainly foretold centuries before they came to pass. What a convincing evidence of the divine inspiration of the scriptures!

This statement calls to our mind the mystery of the incarnation:

(Luke 2:52 KJV)  And Jesus increased in wisdom and stature, and in favour with God and man.

(Colossians 2:9 KJV)  For in him dwelleth all the fulness of the Godhead bodily.

(Hebrews 5:8 KJV)  Though he were a Son, yet learned he obedience by the things which he suffered;

But notice how Jesus used his deity?

“They came to a place called Golgotha (which means The Place of the Skull). There they offered Jesus wine to drink, mixed with gall; but after tasting it, He refused to drink it.  When they had crucified Him, they divided up His clothes by casting lots” (Mt. 27:33-35).

The Romans first offered Jesus sweet wine mixed with gall.  “Gall” was poisonous liver bile.  It was mixed with sweet wine and given to deaden the pain of dying.  When they offered it to Jesus, He refused it.  He was unwilling to dull the pain with narcotics or poison.  He would faithfully and fully endure the pain.

Late in the afternoon, Jesus requested a drink…for Jesus said, “I thirst” and the Roman soldiers gave Him a drink of sour vinegar-wine mixed with water.  The Roman soldiers who came from Italy to Israel’s hot climate realized how sick they could get drinking the water.  Jerusalem’s water contained bacteria that could make them violently ill, so the soldiers mixed sour wine with local well water.

“Sour wine” was wine that had passed its time and had turned into vinegar.  The soldiers put it in the water hoping to kill the bacteria.  The soldiers on duty that Friday took along this drink for themselves because they expected to sit in the hot sun at Calvary until their duty was complete.

That afternoon when Jesus called, “I thirst,” they took a 24-inch hyssop branch and dipped a sponge in the vinegar-wine water then lifted it too His lips.  This small act of kindness refreshed Jesus’ thirst.

The physical and spiritual suffering that Jesus endured was all part of God’s plan and in the same way, God has a purpose for our pain.  Something good can always come from our painful situations.

Here we have an evidence of Christ’s humanity.

The Lord Jesus was very God of very God, but he was also very man of very man. This is something to be believed and not for proud reason to speculate upon.

While then there is much about the person of Christ which we cannot fathom with our own understanding, yet there is everything about him to admire and adore: foremost are his deity and humanity, and the perfect union of these two in one person. The Lord Jesus was not a divine man, nor a humanized God; he was the God-man. Forever God, and now forever man.

When the Beloved of the Father became incarnate he did not cease to be God, nor did he lay aside any of his divine attributes, though he did strip himself of the glory which he had with the Father before the world was. But in the incarnation the Word became flesh and tabernacled among men. He ceased not to be all that he was previously, but he took to himself that which he had not before – perfect humanity.

The deity and the humanity of the Savior were each contemplated in Messianic prediction. Prophecy represented the coming one sometimes as divine, sometimes as human. He was the Branch “of the Lord” (Isa. 4:2). He was the Wonderful Counsellor, the mighty God, the Father of the ages (Hebrews), the “Prince of peace” (Isa. 9:6).

The one born at Bethlehem was the divine Word. The Incarnation does not mean that God manifested himself as a man. The Word became flesh; he became what he was not before, though he never ceased to be all he was previously. He who was in the form of God and thought it not robbery to be equal with God “made himself of no reputation, and took upon him the form of a servant, and was made in the likeness of men” (Phil. 2:6, 7). The babe of Bethlehem was Immanuel – God with us -he was more than a manifestation of God, he was God manifest in the flesh. He was both Son of God and Son of Man. Not two separate personalities, but one person possessing two natures – the divine and the human.

While here on earth the Lord Jesus gave full proof of his deity. He spake with divine wisdom, he acted in divine holiness, he exhibited divine power, and he displayed divine love. He read men’s minds, moved men’s hearts, and compelled men’s wills. When he was pleased to exert his power all nature was subject to his bidding. A word from him and disease fled, a storm was stilled, the devil left him, the dead were raised to life. So truly was he God manifest in the flesh, he could say, “he that hath seen me, hath seen the Father.”

So, too, while he tabernacled among men, the Lord Jesus gave full proof of his humanity – sinless humanity. He entered this world as a babe and was “wrapped in swaddling clothes” (Luke 2:7). As a child, we are told, he “increased in wisdom and stature” (Luke 2:52). As a boy we find him “asking questions” (Luke 2:46). As a man he was “wearied” in body (John 4:6).

Elizabeth Prentiss spent most of her adult life as an invalid, seldom knowing a day without constant pain throughout her body. Yet she was described by her friends as a bright-eyed, cheery woman with a keen sense of humor.

Elizabeth was always strong in her faith and she always encouraged others, until tragedy struck her family beyond what even she could bear.

Elizabeth and her husband lost two of their children.  The loss of two of their children brought great sorrow to Elizabeth’s life. For weeks, no one could console her. In her diary she wrote of “empty hands, a worn-out, exhausted body, and a longing to flee from a world that has so many sharp experiences.”

During this period of grief, Elizabeth cried out to God, asking Him to minister to her broken spirit. It was at this time that Elizabeth’s pain brought something inspirational to all of us!  For many years, the church has been encouraged as they sing the words penned by Elizabeth Prentiss in her deepest sorrow:

Once earthly joy I craved, sought peace and rest; Now Thee alone I seek—Give what is best;
This all my prayer shall be: More love, O Christ, to Thee…

Let sorrow do its work, send grief and pain; Sweet are Thy messengers, sweet their refrain,
When they can sing with me, More love, O Christ, to Thee…

Then shall my latest breath whisper Thy praise; This be the parting cry my heart shall raise;
This still its prayer shall be: More love, O Christ, to Thee.

Elizabeth Prentiss…out of her pain and agony…wrote one of the most inspirational Christian songs in our songbook.  Something good came from her tragedy.

GOD UNDERSTANDS OUR PAIN BECAUSE HE EXPERIENCED SUFFERING TOO.

One of the essential truths of the Christian faith is the two natures of Christ.  Not only was Jesus fully God…but He was also fully man.  Jesus was not half-man and half-God.  Jesus was completely human and completely divine at the same time.

At times in Christ’s life, we see both His humanity and His divinity.  When Jesus said that He was thirsty…we see His humanity.  He felt the moment of dehydration.  And looking over the entirety of His life, we see even more shared pain.  He experienced the death of a dear friend, Lazarus, and He wept.  He was tempted to sin by Satan.  He was made fun of, called a drunk, beat up, abandoned by His closest friends and left to hang alone on the cross.  He experienced real suffering.

“For we do not have a high priest who is unable to sympathize with our weaknesses, but we have one who has been tempted in every way, just as we are—yet was without sin” (Hebrews 4:15).

Jesus experienced the same life-difficulties that we all face in some form or fashion.

Philip Yancey and Dr. Paul Brand in their book, In His Image, say this: “Our prayers and cries of suffering take on greater meaning because we now know them to be understood by God.  Instinctively, we want a God who not only knows about pain, but shares in it and affected by our own.  By looking at Jesus, we realize we have such a God.  He took onto Himself the limitations of time and space and family and pain and sorrow.”

It is comforting to know that we have a God who understands our suffering, our temptations, and we can be confident that, if nothing else, He will hold us tightly in His loving arms because He understands our painful experiences.

While on the cross, Jesus was certainly physically thirsty and dehydrated.  However, in the spiritual sense, Jesus’ greatest thirst…His greatest desire…is for us to be saved.

(John 4:7-14 NIV)  When a Samaritan woman came to draw water, Jesus said to her, “Will you give me a drink?” {8} (His disciples had gone into the town to buy food.) {9} The Samaritan woman said to him, “You are a Jew and I am a Samaritan woman. How can you ask me for a drink?” (For Jews do not associate with Samaritans.) {10} Jesus answered her, “If you knew the gift of God and who it is that asks you for a drink, you would have asked him and he would have given you living water.” {11} “Sir,” the woman said, “you have nothing to draw with and the well is deep. Where can you get this living water? {12} Are you greater than our father Jacob, who gave us the well and drank from it himself, as did also his sons and his flocks and herds?” {13} Jesus answered, “Everyone who drinks this water will be thirsty again, {14} but whoever drinks the water I give him will never thirst. Indeed, the water I give him will become in him a spring of water welling up to eternal life.”

On March 5, 1994, Deputy Sheriff Lloyd Prescott was teaching a class for police officers in the Salt Lake City Library.  As he stepped into the hallway he noticed a gunman herding 18 hostages into the next room.  With a flash of insight, Prescott (dressed in street clothes) joined the group as the nineteenth hostage, followed them into the room, and shut the door.  But when the gunman announced the order in which hostages would be executed, Prescott identified himself as a cop.

In the scuffle that followed, Prescott, in self-defense, fatally shot the armed man.  The hostages were released unharmed.

Likewise, Jesus, dressed himself in street clothes, entered into our world, and freed us from our captor,  On the cross, Jesus died, and delivered us from our hostage taker…Satan