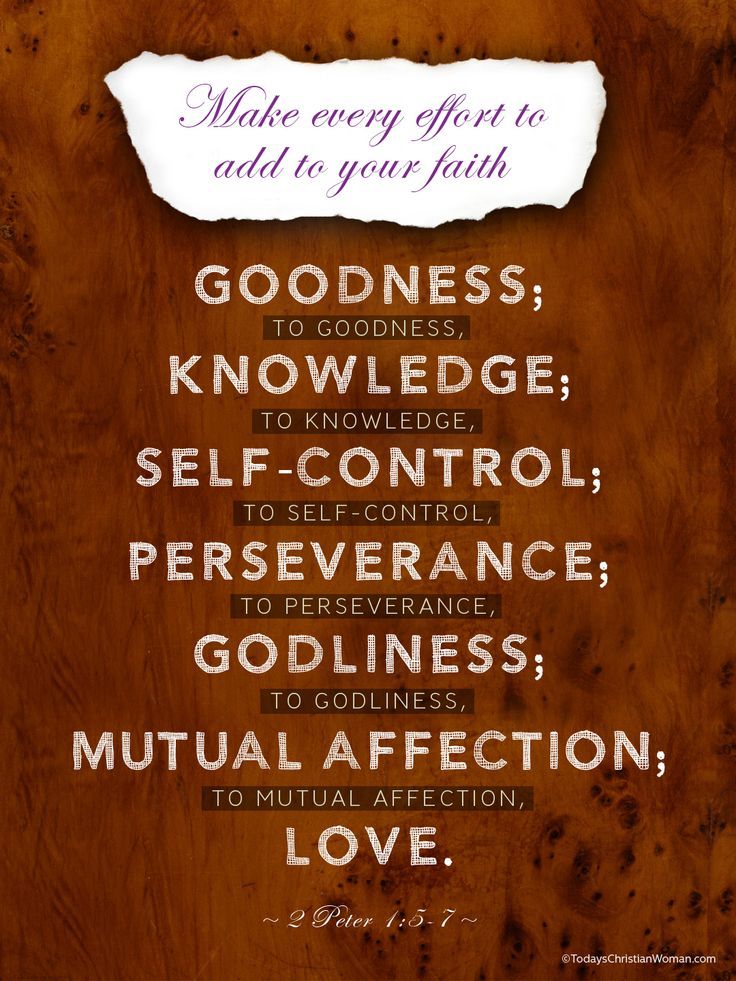 For this very reason, make every effort to add to your faith goodness….”(2 Peter 1:5)

First in Peter’s list of moral excellencies is a word that, in classical Greek meant the God-given ability to perform heroic deeds. It also came to mean that quality of life which made someone stand out as excellent. It never meant cloistered virtue, or virtue of attitude, but virtue which is demonstrated in life. Peter is here writing of moral energy, the power that performs deeds of excellence. [1]

Of all the virtues listed by Peter in our text, this is by far the most difficult virtue to grasp. Two problems have troubled me in my study of this quality. First, the precise meaning of the term rendered “moral excellence” by the New American Standard Bible. The difficulty in defining the word Peter uses here can be inferred from the various ways it is translated:

The key to resolving these two problems seems to be found in the usage of this term in the Greek Translation of the Old Testament in the texts below:

When we compare these Old Testament uses of Peter’s term with all the New Testament occurrences of this same term, the meaning begins to come into focus:

But you are A CHOSEN RACE, A royal PRIESTHOOD, A HOLY NATION, A PEOPLE FOR [God’s] OWN POSSESSION, that you may proclaim the excellencies of Him who has called you out of darkness into His marvelous light (1 Peter 2:9, emphasis mine).

Seeing that His divine power has granted to us everything pertaining to life and godliness, through the true knowledge of Him who called us by His own glory and excellence (2 Peter 1:3, emphasis mine).

Add “virtue” (areten): moral excellence and goodness of character; moral strength and moral courage. It means manliness; being an excellent person in life, a real man or a real woman in life; living life just like one should, in the most excellent way. It means always choosing the excellent way.

The King James Version of “virtue” most often refers to a characteristic or quality of God. In the Isaiah texts, it is that for which God is praised or praiseworthy. In Isaiah 42:8 and 12, it is an expression poetically paralleled with the glory of God. God’s glory is His virtue, His excellencies, for which He is worthy of praise. No wonder Paul will instruct the Philippian saints to set their minds on that which is both “excellent” and “worthy of praise” (Philippians 4:8).

If His excellencies are God’s very nature, His glory for which men should praise Him, then our condition as unbelievers is exactly the opposite:

For all have sinned and fall short of the glory of God (Romans 3:23).

Man in his sinful state refuses to give glory to God, deifying himself instead: For the wrath of God is revealed from heaven against all ungodliness and unrighteousness of men, who suppress the truth in unrighteousness, 19 because that which is known about God is evident within them; for God made it evident to them. 20 For since the creation of the world His invisible attributes, His eternal power and divine nature, have been clearly seen, being understood through what has been made, so that they are without excuse. 21 For even though they knew God, they did not honor Him as God, or give thanks; but they became futile in their speculations, and their foolish heart was darkened. 22 Professing to be wise, they became fools, 23 and exchanged the glory of the incorruptible God for an image in the form of corruptible man and of birds and four-footed animals and crawling creatures. 24 Therefore God gave them over in the lusts of their hearts to impurity, that their bodies might be dishonored among them. 25 For they exchanged the truth of God for a lie, and worshiped and served the creature rather than the Creator, who is blessed forever. Amen. 26 For this reason God gave them over to degrading passions; for their women exchanged the natural function for that which is unnatural, 27 and in the same way also the men abandoned the natural function of the woman and burned in their desire toward one another, men with men committing indecent acts and receiving in their own persons the due penalty of their error. 28 And just as they did not see fit to acknowledge God any longer, God gave them over to a depraved mind, to do those things which are not proper (Romans 1:18-28).

God revealed His nature, His divine power and glory to sinful men, but they refused to give glory to Him. Instead of worshipping God their Creator, they worshipped created things. Instead of believing the truth, they believed a lie. As a consequence of their sin, God gave them over to a depraved mind so they could no longer grasp the truth. Apart from divine grace and intervention, sinful men were hopelessly lost.

The good news: God did act. He sought out sinful men and gave them faith in His Son. He enabled them to become partakers of His divine nature (2 Peter 1:4). Since a part of this nature is His “own glory and excellence” (verse 3), it is little wonder this should become a part of our character as well. The “moral excellence” we are to “add” to our faith is the excellence of God’s nature, which He makes available to us in Christ. We are to “add” it to our faith by acknowledging it as good, as desirable, as worthy of praise, and as that which we wish to emulate in our own lives.

But why does excellence precede knowledge? I think we can understand this in light of Romans 1. Sinful men rejected the glory of God and established their own glory. As a result, they were darkened in their minds, unable to grasp divine revelation and truth. As a result of our salvation, we are now able to recognize the excellencies of our Lord and regard His excellencies as worthy of praise, embracing them as qualities we desire in our own life. When we embrace these virtues, we are then able to grasp the knowledge which comes next in the list of virtues. The apostle Paul puts it this way:

This I say therefore, and affirm together with the Lord, that you walk no longer just as the Gentiles also walk, in the futility of their mind, 18 being darkened in their understanding, excluded from the life of God, because of the ignorance that is in them, because of the hardness of their heart; 19 and they, having become callous, have given themselves over to sensuality, for the practice of every kind of impurity with greediness. 20 But you did not learn Christ in this way, 21 if indeed you have heard Him and have been taught in Him, just as truth is in Jesus, 22 that, in reference to your former manner of life, you lay aside the old self, which is being corrupted in accordance with the lusts of deceit, 23 and that you be renewed in the spirit of your mind, 24 and put on the new self, which in [the likeness of] God has been created in righteousness and holiness of the truth (Ephesians 4:17-25; see also Ephesians 1:13-23).

To embrace the excellencies of God is to strive after them and then to express them in our lives to the glory and praise of God:

But you are A CHOSEN RACE, A royal PRIESTHOOD, A HOLY NATION, A PEOPLE FOR [God’s] OWN POSSESSION, that you may proclaim the excellencies of Him who has called you out of darkness into His marvelous light (1 Peter 2:9, emphasis mine).

Embracing and pursuing the excellencies of God means having the spirit of mind which exalts the Word of God and explores the Word for the knowledge of Him who saved us. Thus we see how “virtue” or “excellence” precedes “knowledge.”

“If any man is willing to do His will, he shall know of the teaching, whether it is of God, or [whether] I speak from Myself” (John 7:17).

In summation, the excellence or virtue of God is God’s glorious nature, which is our ultimate good we should pursue as the goal of our character to the praise and glory of God. Doing so produces a mindset receptive to the knowledge of God revealed through the Scriptures.

“Excellence” is greatly emphasized these days in the secular culture and also in the church. I must say with deep regret that none of the excellence sought after today is that of which Peter speaks in our text. The “excellence” often sought by Christians concerns numbers and worldly standards and appearances rather than the moral character which emulates the excellencies of our Lord to His praise and glory. But this is not a new problem. This same mindset characterized the saints of old, causing King Lemuel to write about the “virtuous woman” in Proverbs 31:10-31, where he contrasted the worldly standard of physical beauty with the moral excellence of godly character:

“Many daughters have done nobly, But you excel them all.” 30 Charm is deceitful and beauty is vain, [But] a woman who fears the LORD, she shall be praised (Proverbs 31:29-30).

Posted by Gary Davenport on September 1, 2022 in Christian graces