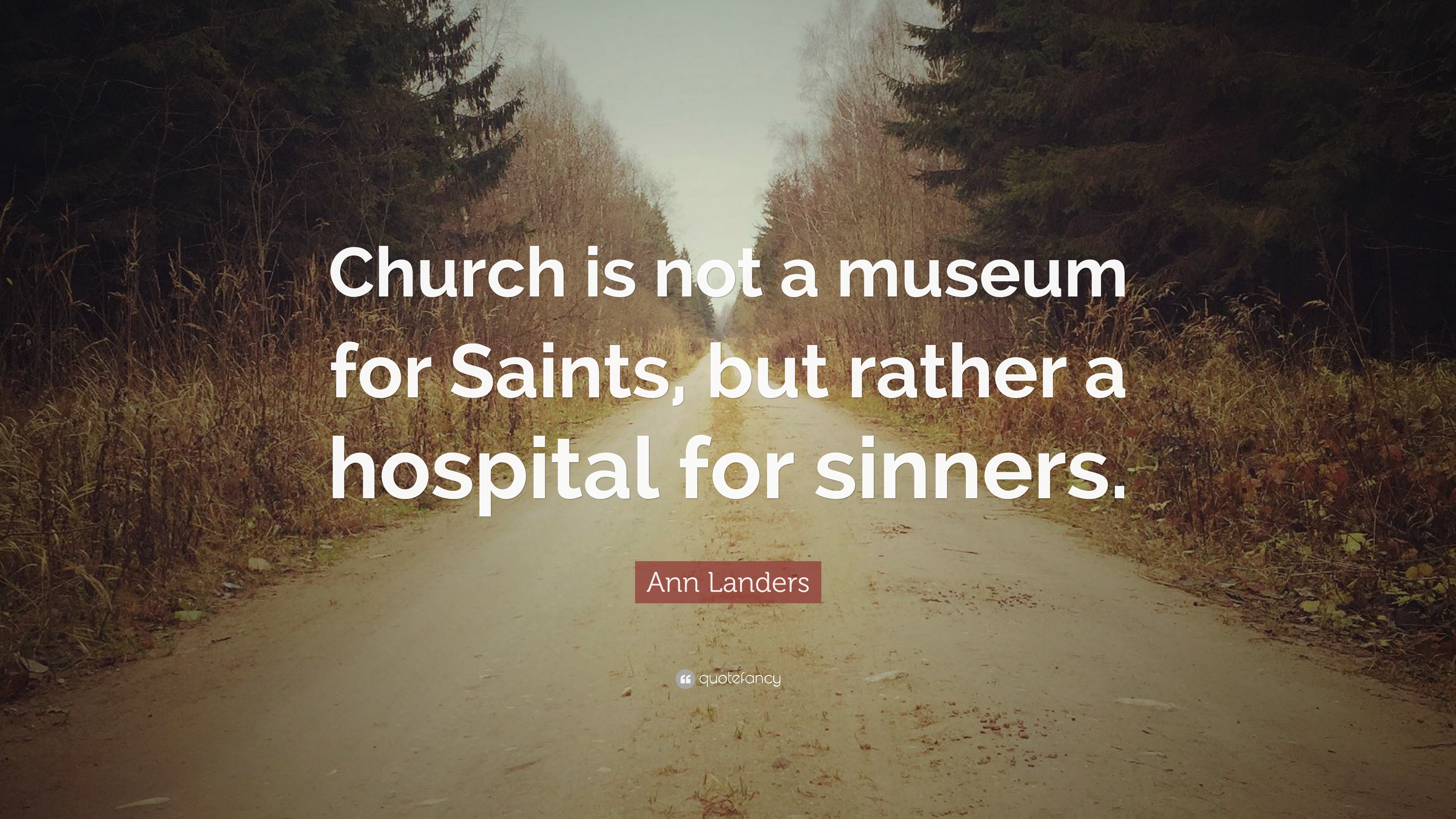 Someone has said, “The church is a hospital for sinners, not a museum for the display of saints.” That was certainly the case with the Corinthian church…there were people who had been guilty of every sin known to mankind.

When Paul looked at that audience, he was looking at people who have committed adultery and fornication, who have been guilty of wife abuse or child molestation, who have robbed or murdered others, and who have spent time in jail—not to mention those who have succumbed to lust, covetousness, hate, and pride.

The church is not made up of perfect people; it is composed of people who have been made righteous by the blood of Christ.

The list of the disinherited that Paul included in 6:10 served very much like a well-known Old Testament parable. God had sent the prophet Nathan to confront David about his sin with Bathsheba (2 Samuel 12:1–14). Nathan’s parable about the rich man who had stolen the poor man’s only lamb and then had killed the lamb enraged the king. At that point, Nathan pointed out that the case they were discussing was David’s own behavior.

Paul used a similar tactic. He reminded the Corinthians of the behaviors that are evidence of sin. He appealed to their shared conviction that such lives, if left unchanged, would not lead to eternal life. Then, as they nodded their heads in agreement, he stated the punch line: “And that is what some of you were” (6:11).

Any time Christians downplay or forget their condition without Christ, there are two negative results:

(2) it makes them less compassionate about people who have never heard the gospel.

In no New Testament passage is the relationship between members of the church and sinners better illustrated than in 1 Corinthians 6:9–11 (ESV)

Or do you not know that the unrighteous will not inherit the kingdom of God? Do not be deceived: neither the sexually immoral, nor idolaters, nor adulterers, nor men who practice homosexuality, 10 nor thieves, nor the greedy, nor drunkards, nor revilers, nor swindlers will inherit the kingdom of God. 11 And such were some of you. But you were washed, you were sanctified, you were justified in the name of the Lord Jesus Christ and by the Spirit of our God.

This passage teaches three significant truths about the church and sinners.

In this context, Paul was teaching the Corinthian church to live righteously. This involved, for example, not going to law against one another (1 Corinthians 6:1–8) and not committing fornication (6:15–20).

To convince them that they ought to avoid the sins that were common in the city of Corinth, Paul said bluntly that those guilty of certain  sins  “will   not   inherit  the  kingdom  of  God.” “Inheriting the kingdom of God” is the equivalent of going to heaven.

Paul did not intend to say that these sins alone will keep people out of heaven. Rather, these ten are representative of all kinds of unrighteousness. Anyone participating in the sins common among the world will not “inherit the kingdom of God.”

And such were some of you, Paul continues. The Corinthian church, as churches today, had ex-fornicators, ex-adulterers, ex-thieves, and so on. Though many Christians have never been guilty of the particular sins just discussed, every Christian was “a sinner in need of a Savior.” Every Christian is an ex-sinner…and even as Christians, we are still “sinning saints.”

Christ came for the purpose of saving sinners (Matt. 9:13). That is the great truth of Christianity: no person has sinned too deeply or too long to be saved.

“Where sin increased, grace abounded all the more” (Rom. 5:20). But some had ceased to be like that for a while, and were reverting to their old behavior.

It made no difference what they were before they were saved. God can save a sinner from any sin and all sin. But it makes a great deal of difference what a believer is like after salvation. He is to live a life that corresponds to his cleansing, his sanctification, and his justification. His Christian life is to be pure, holy, and righteous. The new life produces and requires a new kind of living.[1]

He ate with tax collectors and sinners (Luke 15:1, 2). He loves the lost—all the lost, those who are despised as well as those who are “not far from the kingdom” (see Mark 12:34). Consequently, in the New Testament church, everyone was welcome—no matter what kind of sinner he had been before!

Let us consider this analogy: How does one qualify to be admitted to a hospital? He is sick! Likewise, to get into the church of our Lord, the first requirement is that the person is spiritually sick! He is a sinner! Any sinner—regardless of the sins he or she has committed—is welcome in Christ’s church, the hospital for sinners!

Paul’s Message to Us

We can rejoice that the sinners in the church Paul stressed that there is no kind of sin that cannot be forgiven.

Because Jesus took their punishment, sinners are able to come to God. With the full name as given here, “the Lord Jesus Christ,” comes the full title of the One who is God, who became a man, and who then returned to heaven to reign forever.

Sin Should Be in the Past

The Church Should Be A Support Group

Perhaps, rather than comparing the church to a hospital, we should also liken it to a rehabilitation center or a mutual support group. “12­step groups” like Alcoholics Anonymous offer advice, encouragement, and accountability for people who are trying to change their lives.

We all are part of this support group, trying to help

one another overcome a common problem. We all have weaknesses; we are all tempted to sin.

When we see ourselves as helping one another, none of us can feel superior to anyone else. While one Christian may struggle with covetousness or greed, another may battle immorality. Still another may be trying to overcome lying or anger. We are all trying to be more like Jesus, trying to conquer fleshly desires and take on the divine nature. We are all sinners saved by grace.

We must truly be striving to put off the old man, to quit the sin we were guilty of before we became Christians. Christ accepts sinners, but He does not tolerate sin!

1 Corinthians 6:18–20 (ESV) Flee from sexual immorality. Every other sin a person commits is outside the body, but the sexually immoral person sins against his own body. 19 Or do you not know that your body is a temple of the Holy Spirit within you, whom you have from God? You are not your own, 20 for you were bought with a price. So glorify God in your body.

Paul says that our bodies are the temple of God (6:19–20). In sexual sin, a person removes his or her body from God’s control to unite with someone not in his plan. Thus, those people violate God’s purpose for their bodies.

Paul says, don’t walk, but run away from sexual sin. Believers need to exercise alertness and awareness to stay away from places where temptation is strong, and they need to use strong, evasive action if they find themselves entrapped.

Paul asked for the sixth time in this chapter Do you not know? indicating that this was a fact the Corinthians should have known but apparently had missed or forgotten.

The words “your body” in this verse refer not to the corporate “body of Christ,” but to each believer’s individual, physical body.

How should the Corinthian believers think about their bodies? Paul explained that each should view his or her body as a temple of the Holy Spirit, who was living in them.

Because your body belongs to God, you must not violate his standards for living. Make it your practice to have an occasional body checkup in prayer. Reflect on how you are treating your body and ask God to point out any thoughts or behaviors that need change or improvement

This Holy Spirit had come into them when they had believed, having received him from God. The believers, therefore, ought to honor God with their bodies. Just as the temple was a place for worship, sacrifice, prayer, and communion with God, so should our bodies be used to implement these high purposes.

Posted by Gary Davenport on November 28, 2022 in 1 Corinthians