RSS
← Children can become empty and lonely on the inside…
Why did Jesus fold the linen burial cloth after His resurrection? →

Free book from Gary: The Measure of One’s Life book

One of the most arresting photographs I’ve ever seen came about when Julie and Alex Armas agreed to permit a photographer for USA Today into an operating room at Vanderbilt University Medical Center in Nashville. 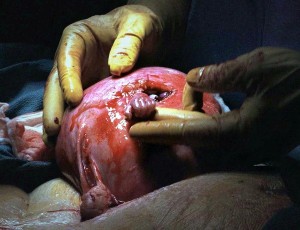 The date was August 19, 1999, and Mr. and Mrs. Armas had agreed to allow surgery on their 21-week-old son. And you should understand that the 21 weeks were from the time of their son’s conception, not his birth.

The surgery was to be performed in utero. Infant Armas had been found to have spina bifida, which had left part of his spinal cord exposed after the backbone had failed to develop properly. The surgery was designed to close the gap and protect the baby’s fragile spinal cord.

The operation was performed through a tiny slit made in the wall of Mrs. Armas’ womb. The thing that proved so amazing about the photography sequence that emerged from that operating room is that Samuel Alexander Armas — still not viable outside his mother’s womb — surprised everyone with a reflex movement that not only extended his arm from the cramped quarters hosting his imperfect body but grasped the finger of Dr. Joseph Bruner.

I suppose we could say that Samuel was “hanging on for dear life” to the surgeon’s hand.

That photo forces me to think of our situation with the Creator God of Heaven and Earth. From our fragile environment and with all the defects of our faith, you and I reach out for God and try to hang on for dear life by means of a grasp called faith.

Samuel  was born at 6:25 p.m. on December 2, 1999, and is doing well. It’s too early to know for sure that he will walk, but he is moving his legs very well and is being monitored regularly.

He’ll have the normal challenges every kid faces growing up, and some of those challenges will relate to the spina bifida for which he underwent dramatic in-utero surgery. But the Armases — who had suffered through two miscarriages before little Samuel’s conception, surgery, and birth — are thrilled with their son. “The details of his limitations become insignificant,” said his father, “and that’s the understatement of the year.”

“We are hard pressed on every side, but not crushed; perplexed, but not in despair; persecuted, but not abandoned; struck down, but not destroyed. . . . Therefore we do not lose heart. Though outwardly we are wasting away, yet inwardly we are being renewed day by day. For our light and momentary troubles are achieving for us an eternal glory that far outweighs them all.” 2 Cor. 4:7-10, 14-16

Although you and I think of Paul in terms of his apostleship and centuries of honor for his role in the early church, the words of our text today were spoken in a defensive tone. Paul’s mission at Corinth had been under fire from some harsh critics. The criticism was severe enough that he had been tempted to “lose heart” (2 Cor. 4:1). He was determined, however, to fulfill his ministry and not to dishonor the trust God had given him. By means of a faith-grasp on God’s hand, he had resolved that nothing would make him relinquish that hold.

The key theme of this section is repeated in 1 Corinthians 4:1 and 16: “We faint not!” Literally, Paul said, “We do not lose heart!” There were certainly plenty of reasons for discouragement in Paul’s situation, yet the great apostle did not quit. What was it that kept him from fainting in the conflicts of life? He knew what he possessed in Jesus Christ! Instead of complaining about what he did not have, Paul rejoiced in what he did have; and you and I can do the same thing.

One thing is undeniable about Jesus: He was brutally honest about his call to discipleship. He drew people with the warning that their eventual triumph and joy in following him would come through hardship, danger, and perhaps even death. “Blessed are those who are persecuted because of righteousness, for theirs is the kingdom of heaven,” he told them. “Blessed are you when people insult you, persecute you and falsely say all kinds of evil against you because of me” (Matt. 5:10-11).

Maybe Jesus understood one of the things about human nature that we occasionally discover for ourselves: Few people are motivated to do their best in a cushy, unchallenging job. There are people every year who quit jobs with good salaries because of the lack of challenge. Few things in life are more insulting to some of us than to be offered an easy job, a job just anybody could perform. Work without challenge offers no sense of joy in accomplishment.

But forget ordinary work and careers for a minute. Does anyone seriously think he/she could join God Almighty in doing something and not be stretched to his/her limits? How can we participate with God in anything and not be challenged? How could we participate in his holiness within a cosmos in rebellion against him and not be put at risk?

Paul’s personal experience in following Christ had certainly lived up to its advance billing. He had indeed been “persecuted because of righteousness,” endured repeated vile “insult,” and had people “falsely say all kinds of evil” about him because of his commitment to Jesus of Nazareth.

Later in this same epistle, Paul — with an obvious sense of embarrassment for having to cite such things in order to answer the slander of his opponents — gave a list of things he had been forced to endure over the course of his ministry:

If that sentiment is correct, Paul comes off well. He was a mature Christian. He understood that his faith would not exempt him from adversity. Or, to quote Augustine: “God had one son on Earth without sin, but he has never had one without suffering.”

But you and I live at a different time and with a different mind set. The sentiment most of us carry is that adversity in our experience somehow contradicts the doctrine of the love of God. But it is shallow thinking and flawed faith that would measure the degree of God’s love by the comfort of our earthly situation.

Posted by Gary Davenport on September 7, 2015 in Encouragement

← Children can become empty and lonely on the inside…
Why did Jesus fold the linen burial cloth after His resurrection? →