God’s Person in an Upside-Down World” — The Be-attitudes Series #4 Happy Are the Hungry (5:6)

Matthew 5:6: “Blessed are those who hunger and thirst for righteousness, for they will be filled. 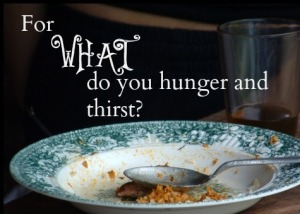 Very few of us in modern conditions of life know what it is to be really hungry or really thirsty. In the ancient world it was very different. A working man’s wage was the equivalent of three pence a day, and, even making every allowance for the difference in the purchasing power of money, no man ever got fat on that wage. A working man in Palestine ate meat only once a week, and in Palestine the working man and the day laborer were never far from the border-line of real hunger and actual starvation.

It was still more so in the case of thirst. It was not possible for the vast majority of people to turn a tap and find the clear, cold water pouring into their house. A man might be on a journey, and in the midst of it the hot wind which brought the sand-storm might begin to blow. There was nothing for him to do but to wrap his head in his burnoose and turn his back to the wind, and wait, while the swirling sand filled his nostrils and his throat until he was likely to suffocate, and until he was parched with an imperious thirst. In the conditions of modern western life there is no parallel at all to that.

This beatitude is in reality a question and a challenge. In effect it demands, “How much do you want goodness? Do you want it as much as a starving man wants food, and as much as a man dying of thirst wants water? “How intense is our desire for goodness?

Most people have an instinctive desire for goodness, but that desire is wistful and nebulous rather than sharp and intense; and when the moment of decision comes they are not prepared to make the effort and the sacrifice which real goodness demands.

At the back of it there is the meaning that the man who is blessed is not necessarily the man who achieves this goodness, but the man who longs for it with his whole heart. If blessedness came only to him who achieved then none would be blessed. But blessedness comes to the man who, in spite of failures and failings, still clutches to him the passionate love of the highest.

This beatitude speaks of strong desire, of driving pursuit, of a passionate force inside the soul. It has to do with ambition—ambition of the right sort—whose object is to honor, obey, and glorify God by partaking of His righteousness. This holy ambition is in great contrast to the common ambitions of men to gratify their own lusts, accomplish their own goals, and satisfy their own egos.

A starving person has a single, all-consuming passion for food and water. Nothing else has the slightest attraction or appeal; nothing else can even get his attention.

The heart of every person in the world was created with a sense of inner emptiness and need. Yet apart from God’s revelation men do not recognize what the need is or know what will satisfy it.

Jesus declares that the deepest desire of every person ought to be to hunger and thirst for righteousness. That is the Spirit-prompted desire that will lead a person to salvation and keep him strong and faithful once he is in the kingdom. It is also the only ambition that, when fulfilled, brings enduring happiness.

The first three beatitudes are also costly and painful. Becoming poor in spirit involves death to self. Mourning over sin involves facing up to our sinfulness. Becoming meek involves surrendering our power to God’s control.

The fourth beatitude is more positive and is a consequence of the other three. When we put aside self, sins, and power and turn to the Lord, we are given a great desire for righteousness. The more we put aside what we have, the more we long for what God has.

Young man walking with older man…younger man did not understand the meaning of the lesson. (Describe what he did to teach the lesson).

“Blind guides” is a perfect description…Jesus had used it before (Matt. 15:14). The Pharisees were blind to the true values of life. Their priorities were confused. They would take an oath and use some sacred object to substantiate that oath—the gold in the temple, for example, or the gift on the altar. But they would not swear by the temple itself or the altar. It was the temple that sanctified the gold and the altar that sanctified the gift. They were leaving God out of their priorities.

Jesus knew that the Pharisees wanted both the gold and the gifts on the altar. These men were not seeking for the righteousness of God; they were greedy for gain. They worked out a “religious system” that permitted them to rob God and others and still maintain their reputations.