God stronger than the devil….we are on the winning side 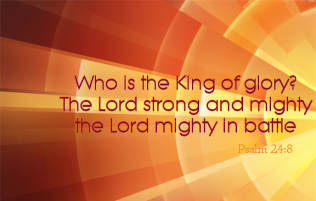 In the midst of a storm, a little bird was clinging to the limb of a tree, seemingly calm and unafraid. As the wind tore at the limbs of the tree, the bird continued to look the storm in the face, as if to say, “Shake me off; I still have wings.”

Hope prevents us from clinging to what we have and frees us to move away from the safe place and enter unknown and fearful territory. The only fight which is lost is that which we give up. We must be careful for nothing, prayerful for everything, thankful for anything.

We must have plenty of courage. God is stronger than the devil. We are on the winning side.

Success is never final; failure is never fatal; it is courage that counts. The great need for anyone in authority is courage. Courage is almost a contradiction in terms:  it means a strong desire to live taking the form of readiness to die.

Courage is not limited to the battlefield or the Indianapolis 500 or bravely catching a thief in your house. The real tests of courage are much deeper and much quieter. They are the inner tests, like remaining faithful when nobody’s looking, like enduring pain when the room is empty, like standing alone when you’re misunderstood

A sailor was given liberty to go ashore when his ship docked at a large southwestern American city.  He visited a park famous for its trees and tropical flowers. As he walked across an open grassy sunlit area, he noticed bees flying all around him.  Suddenly, all the bees began to settle upon him. They were all over his clothes, his hands, and his face. Panic gripped him, and though he wanted to run in fear, he forced himself to stand stock still. There were hundreds, maybe thousands, of bees all over him.  He hardly dared to breathe.

“Look at that sailor,” he heard a woman’s voice say. After what seemed an eternity to the sailor, slowly the bees departed one by one until they were all gone.  His uniform was soaked with perspiration, but he had not been stung once.

Sometimes it is better to stand stock still in the midst of danger than to run in panic and fear and possibly to bring about the very end one wishes to avoid.

Scripture says,  “”Whoever flees from the terror will fall into a pit, whoever climbs out of the pit will be caught in a snare; for I will bring upon Moab the year of her punishment,” declares the LORD.” (Jeremiah 48:44)

’Tis nothing for a man to hold up his head in a calm; but to maintain his post when all others have quitted their ground and there to stand upright when other men are beaten down is divine. Lucius Annaeus Seneca (c. 4 b.c.–a.d. 65)

Do not ask the Lord for a life free from grief, instead ask for courage that endures. Far better it is to dare mighty things, to win glorious triumphs, even though checkered by failure, than to take rank with those poor spirits who neither enjoy much nor suffer much because they live in the gray twilight that knows not victory nor defeat. Theodore Roosevelt (1858–1919)

I do not ask to walk smooth paths nor bear an easy load, I pray for strength and fortitude to climb the rock-strewn road. Give me such courage I can scale the hardest peaks alone, and transform every stumbling block into a stepping-stone. Gail Brook Burket

It takes guts to leave the ruts. Robert Harold Schuller (1926– )