RSS
← Spending Time With Jesus: Relational Sins: How to Deal With Them – Luke 17:1-6
Beware the Leaven of the Pharisees series #7 The King’s Denunciation – Matthew 23 (part 4) → 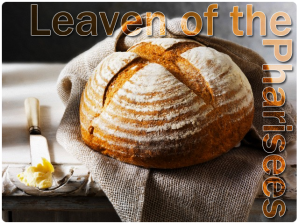 (Matthew 23:15 NASB) “”Woe to you, scribes and Pharisees, hypocrites, because you travel about on sea and land to make one proselyte; and when he becomes one, you make him twice as much a son of hell as yourselves.”

Like the first two beatitudes, this one must have been shocking and perplexing to Jesus’ hearers. He taught principles that were totally foreign to their thinking.

Jesus’ audience knew how to act spiritually proud and spiritually self-sufficient. They were proficient in erecting a pious facade. They actually believed that the Messiah was coming soon and would commend them for their goodness. He would, at last, give the Jewish people their rightful place in the world—a position above all other people, because they were the chosen of God.

They eagerly anticipated that the Messiah would deal gently with them and harshly with their oppressors, who for nearly a hundred years had been the Romans. After the Maccabean revolution that freed them from Greece, the Jews had a brief time of independence. But Rome’s rule, though not as cruel and destructive, was much more powerful than that of Greece. Since 63 b.c., when Pompey annexed Palestine to Rome, the region had been ruled primarily by puppet kings of the Herodian family and by Roman governors, or procurators, the best known of which to us was Pilate.

The Jews so despised Roman oppression that sometimes they even refused to admit it existed. One day as He taught on the Mount of Olives, Jesus had one of His strongest exchanges with the Pharisees. When He said “to those Jews who had believed Him, ‘If you abide in My word, then you are truly disciples of Mine; and you shall know the truth, and the truth shall make you free,’” the Pharisees’ response was strange. “We are Abraham’s offspring,” they said, “and have never yet been enslaved to anyone; how is it that You say, ‘You shall become free?’” (John 8:31-33).

The fact was, of course, that Israel’s history was one of repeated conquest and oppression—by Egypt, Assyria, the Medes and Persians, the Greeks, and, at that very time, Rome. Apparently pride would not allow those Pharisees to acknowledge one of the most obvious facts of their nation’s history and of their present situation.

The blessings of the Beatitudes are for those who are realistic about their sinfulness, who are repentant of their sins, and who are responsive to God in His righteousness. Those who are unblessed, unhappy, and shut out of the kingdom are the proud, the arrogant, the unrepentant—the self-sufficient and self-righteous who see in themselves no unworthiness and feel no need for God’s help and God’s righteousness.

Meekness has always been God’s way for man. It is the way of the Old Testament. In the book of Job we are told that God “sets on high those who are lowly, and those who mourn are lifted to safety” (5:11). Moses, the Jews’ great deliverer and law-giver, “was very humble, more than any man who was on the face of the earth” (Num. 12:3). The Jews’ great King David, their supreme military hero, wrote, “He [the Lord] leads the humble in justice, and He teaches the humble His way” (Ps. 25:9).

Meekness is the way of the New Testament. It is taught by Jesus in the Beatitudes as well as elsewhere and is continued to be taught by the apostles. Paul entreated the Ephesians to “walk in a manner worthy of the calling with which you have been called, with all humility and gentleness, with patience, showing forbearance to one another in love” (Eph. 4:1-2). He told the Colossians to “put on a heart of compassion, kindness, humility, gentleness and patience” (Col. 3:12). He told Titus to remind those under his leadership “to be subject to rulers, to authorities, to be obedient, to be ready for every good deed, to malign no one, to be uncontentious, gentle, showing every consideration for all men” (Titus 3:1-2).

(Matthew 23:15 NASB) “”Woe to you, scribes and Pharisees, hypocrites, because you travel about on sea and land to make one proselyte; and when he becomes one, you make him twice as much a son of hell as yourselves.”

A proselyte is a convert to a cause. The Pharisees were out to win others to their legalistic system, yet they could not introduce these people to the living God. Instead of saving souls, the Pharisees were condemning
souls!

This person parades his own self-righteousness through whatever religious system he belongs to. The convert usually shows more zeal than his leader, and this “double devotion” only produces double condemnation. How tragic that people can think they are going to heaven, when actually they are going to hell!

Jesus cursed the scribes and Pharisees for their subversion of the people. They not only excluded them from the true faith but subverted them with false faith.

In New Testament times a great effort was being made to convert Gentiles to Judaism. They worked aggressively, traveling about on sea and land to make one proselyte. The word proselyte had the basic meaning of a person who has arrived, and came to be commonly used of an outsider who was brought into a religion.

Had that Jewish effort been made in the right way and for the right reasons, it would have been commendable, because Israel had been called to be God’s channel for reaching the world for Himself. In His covenant with Abraham the Lord promised that through him and his descendants “all the families of the earth shall be blessed” (Gen. 12:3). In the covenant at Sinai the Lord set Israel apart as a “kingdom of priests and a holy nation” (Ex. 19:6), who, like her Messiah, was meant to be a light to the nations (Isa. 49:6).

But for most of her history, Israel aspired to do anything but bring Gentiles to God. Like Jonah, they loathed the idea of pagans repenting, being saved, and thereby gaining the same standing before God that they enjoyed. By his own admission, it was for the purpose of forestalling, and no doubt if possible preventing, the repentance and forgiveness of Nineveh that Jonah tried to flee to Tarshish (Jonah 4:2).

By the time Jesus began preaching, however, a different spirit had arisen among some of the Jews, and they were zealously trying to win converts. As the result of those efforts, many synagogues had regular Gentile worshipers who had turned from paganism. Partly because Jews had such an unsavory reputation for exclusiveness and bigotry. Gentile proselytes were not easy to make, and when one of them converted he was considered something of a prize.

The other kind was referred to as “a proselyte of righteousness,” so called because he became as religiously Jewish as a Gentile could become. They participated in all the ceremonies, rituals, and feasts; they observed all the cleansing and other rites, both biblical and traditional; and if males, they were circumcised. Those converts were even given Jewish names in order to separate them as much as possible from their pagan past. Contrary to their popular appellation, however, they became anything but righteous. Like the scribes and Pharisees who instructed them, they became paragons of self-righteousness.

For obvious reasons there were many more proselytes of the gate than proselytes of righteousness. It was the latter kind in which the scribes and Pharisees delighted, and it was considered a great achievement to initiate a Gentile into all their legalistic practices.

Posted by Gary Davenport on January 4, 2021 in Pharisees

← Spending Time With Jesus: Relational Sins: How to Deal With Them – Luke 17:1-6
Beware the Leaven of the Pharisees series #7 The King’s Denunciation – Matthew 23 (part 4) →