Spending Time With Jesus: Relational Sins: How to Deal With Them – Luke 17:1-6 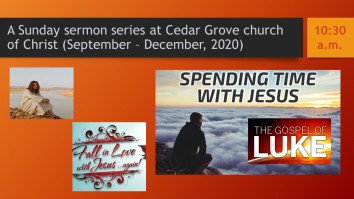 Sometimes when I counsel with couples I marvel at how this angry, bitter couple sitting in my office could be the same couple that just a few years before stood at the altar, gazing adoringly into each other’s eyes, promising to love one another forever. What went wrong?

Relational problems not only occur in the church; they also occur in the home and anywhere else that people have to work closely with one another.

In a word, what went wrong is sin and not dealing properly with that sin. Relationships can be the source either of our deepest joy in life or of our deepest pain, depending on whether we follow God’s directives on how to work through relational problems. The second greatest commandment in the Bible is to love our neighbor. Thus the Bible is filled with counsel on how to love one another. In our text, Jesus is saying,

We should be on guard against relational sins and we should deal with them biblically when they occur.

Having just dealt with the Pharisees and their religious hypocrisy, Jesus now turns to the disciples with a corrective warning. The false teaching and self-centered, superficial religion of the Pharisees would inevitably cause many of the sinners who had recently turned to Christ (15:1) to stumble in their new faith.

Jesus warned his disciples against causing the downfall of other believers and holding grudges against them. He also encouraged them to place their complete trust in God and to serve him with joy.

1  And he said to his disciples, “Temptations to sin are sure to come, but woe to the one through whom they come!  2  It would be better for him if a millstone were hung around his neck and he were cast into the sea than that he should cause one of these little ones to sin. 3  Pay attention to yourselves!

The Greek word skandala used here denotes any hindrance that causes another person to fall into sin, whether through temptation or false teaching. Jesus explained that this was bound to happen, but it did not excuse that person through whom the temptation came

Jesus explained that the consequences were so severe that it would be better to have a millstone tied around one’s neck and be thrown into the sea than for a person to face God after causing others to stumble.

A “millstone” was a heavy, flat stone used to grind grain. This large stone would be connected to an ox or donkey that would walk in a circle, causing the stone to roll and crush the grain. To have a millstone tied around the neck and be dumped into the sea pictured a horrifying death by drowning. Even such a death would be minor, however, compared to what this person would face in eternity.

When Jesus refers to “these little ones,” He probably means the new believers from among the sinners and tax-gatherers (15:1) who were coming to Him. The phrase, “little ones,” pictures them as God’s little children, showing His tender concern for their well-being.

The major reason that we are so prone to sin against others and to take offense when others sin against us is that our sinfulness prompts us to justify ourselves and to blame others.

When Jesus warns, “Be on guard,” He means that each of us needs to look first and foremost to our own hearts. When relational conflicts erupt, the first thing you should do is to ask God to show you what part you are responsible for. If you think that, being generous, you’re responsible for ten percent of the problem, you can safely multiply that number by four or five!

We all are prone to justify ourselves and blame others. But healing will not begin in damaged relationships until each person allows the Spirit of God through the Word of God to shine into his or her own heart and reveal the sin that is there.

We need to guard against relational sins because God views them so seriously.

2. Deal biblically with relational sins when they occur: rebuke, repentance, and forgiveness (17:3b-4).

Careful leadership is important for Jesus’ followers, but so is constant forgiveness. When there is sin among God’s people, they are responsible to rebuke one another. To “rebuke” does not mean to point out every sin, for Jesus also warns against being judgmental (6:37).

To “rebuke” (always in love) means to bring sin to a person’s attention with the purpose of restoring that person to God and to fellow humans. In context here, this refers to sin that could pull that person or others away from God and thus result in the horrible judgment Jesus spoke of in 17:2.

When a person feels that he or she must rebuke another Christian for a sin, it is wise for that person to check his or her attitudes and motivations first. Unless rebuke is tied to forgiveness, it will not help the sinning person.

Jesus explained, in fact, that if the other person repents, the rebuker must forgive. And that forgiveness extends constantly (seven times a day simply means “all the time”) because, after all, that is how God deals with every person.

Because God has forgiven all believers’ sins, they should not withhold forgiveness from others. Realizing how completely Christ has forgiven should produce a free and generous attitude of forgiveness toward others. Those who don’t forgive others set themselves outside and above Christ’s law of lov

In my experience of helping people work through relational conflicts, this step is often neglected completely out of cowardice or done poorly at best. People would sooner walk away from a strained relationship than to give biblical rebuke to the person who is sinning against them or against others.

Or, quite often if someone sins against us, we go and tell others about it, “just so they can pray about it” or “to get their counsel.” Sure! Jesus clearly says, “If your brother sins (against you is implied), rebuke him.”

Let’s face it, it’s not pleasant to have to rebuke someone. If you find it pleasant, you are not in the right frame of mind to do it and you will probably do it in an ungodly manner! But the command to rebuke a sinning brother is the first step in the restoration process. You are not dealing with him biblically until you do it.

Rebuking a fellow believer requires care. Finding fault and expressing it effectively are delicate proceedings. People are easily offended. We are not to be passive about strained relationships. To be apathetic is not to love the other person. We should ardently go after peace.

If someone who professes to be a Christian is acting in a way that brings shame to the name of Christ, and you know the person and are aware of his behavior, you’re it! You need to go and talk to him about his sin in an attempt to bring him to repentance. To let it go is not to care about the Lord’s glory or your brother’s holiness.

In a first-time confrontation, try these six steps:

Is the other person’s sin damaging your relationship with him (or her)? Perhaps the other person habitually gossips about others, so that you find yourself wanting to avoid being around her (or him). You don’t have to become best of friends, but the loving thing to do is not to avoid her, but to attempt to help her face up to her sin and repent.

Or, perhaps the person said or did something that hurt you, so that you find yourself dodging him every time you see him. Again, the loving thing to do is to meet privately and confront what he did so that you help him grow as a believer.

Is the other person’s sin seriously hurting others? Perhaps you see a young mother who verbally or physically abuses her children. Or it may be a professing Christian is ensnared in drug or alcohol abuse, along with the inevitable deception that accompanies those sins. You are not showing God’s love to let the person go on in this destructive behavior. You must rebuke with the view of leading the person to repentance.

Is the other person’s sin seriously hurting himself? If you see a Christian engaging in some sin that is going to destroy him and you shrug and say, “That’s his problem,” you are not loving your brother. As James 5:19-20 says, “My brethren, if any among you strays from the truth, and one turns him back; let him know that he who turns a sinner from the error of his way will save his soul from death, and will cover a multitude of sins.”

Is the person’s sin an often repeated pattern? If a person does the same thing over and over, he is enslaved to that sin and needs help getting out of it. Anger, lust, greed, selfishness, insensitivity to others, laziness or a lack of self-discipline, and many other sins can destroy a person’s faith if he does not get the victory in Christ. If you see these habit patterns, you need to come alongside and offer help in the Lord.

The goal of rebuke is repentance.

The goal of rebuking another believer is not “to get it off your chest.” It is not “to give him a piece of your mind.” It is not to prove that you’re right and he’s wrong. It is not to win so that next time you have some ammunition to use in the heat of battle.

The goal is to bring your brother to repentance, to restore his relationship with the Lord, with you, and with others. Until you have that goal clearly in mind, you are not ready to rebuke your brother.

The response to repentance is forgiveness.

Biblical forgiveness is a decision, not a feeling. It is to dismiss the case from court. The word means to let go or release. When you forgive, you choose to let the matter drop and you promise not to bring it up against the person in the future.

5  The apostles said to the Lord, “Increase our faith!” 6  And the Lord said, “If you had faith like a grain of mustard seed, you could say to this mulberry tree, ‘Be uprooted and planted in the sea,’ and it would obey you.

Handling Conflict With Maturity. Could Paul, David, or Peter attend this congregation? All are known as great men of faith and yet they committed terrible sins in their adult years trying to serve the Lord.

Peter denied Christ in spite of being warned about it beforehand. David’s sin of pride cost the death of 70,000 men in 1 Chronicles 21. David was an adulterer and a murderer…yet called him “a man after God’s own heart.”

Perhaps Paul gives us words to encouragement if we’re having difficulty answering the question: (1 Timothy 1:15-16)  “Here is a trustworthy saying that deserves full acceptance: Christ Jesus came into the world to save sinners–of whom I am the worst. {16} But for that very reason I was shown mercy so that in me, the worst of sinners, Christ Jesus might display his unlimited patience as an example for those who would believe on him and receive eternal life.”