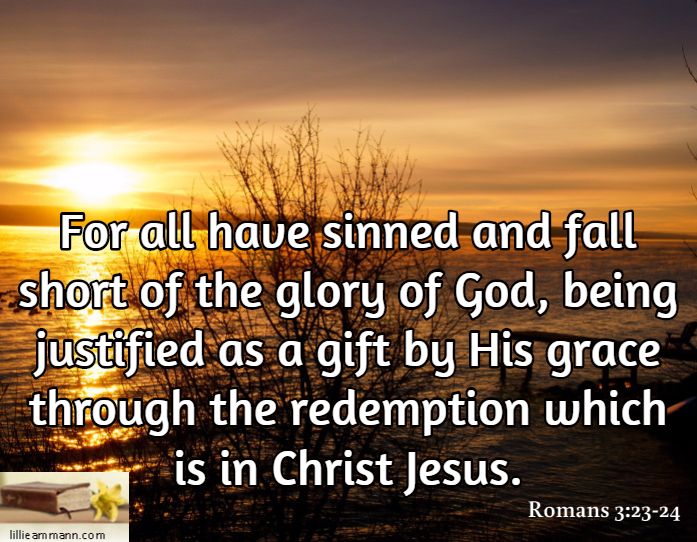 This year thousands of Americans will hear the much feared and dreaded diagnosis: “Cancer.” Cancer infects not only Americans but also people around the world. Suppose the newspaper headlines announce tomorrow, “A Cure Found for Cancer!” That would fill our lives with joy.

But there is another disease which is far more deadly than cancer, the disease of sin. It is a disease that infects not only a percentage of the population, but every human being. How encouraging it ought to be to each of us that a cure for this disease has been found.

In 1:16, 17, Paul announces the fundamental thesis of the entire book of Romans, “I am not ashamed of the gospel for it is the power of God unto salvation, to everyone who believes, to the Jew first and also to the Greek. For therein the righteousness of God is revealed.”

According to 3:9, 10, none is righteous. We are subjects of the wrath and judgment of God. Therefore, everyone needs the gospel of Christ which is the power of God unto salvation. Paul develops the theme of good news in 3:21.

THE RIGHTEOUSNESS OF GOD

Notice that Paul begins at 3:21 with the words, “But now.” Everybody is lost. Everybody is hopeless. However, that “but now” changes everything. It is the announcement that God has given us the cure to the disease of sin.

God keeps His integrity; His righteous character is vindicated. Let us also think of the plan God has made known to us by which lost men may be right with Him. “The righteousness of God” in Romans is God’s plan revealed in the gospel to make men right with Himself.

He says, “But now apart from the Law the righteousness of God has been manifested.” The law here is the law of Moses. When Paul talked about the religious sinner in Romans 2 and 3, he had primarily in his mind the Jews who lived under the law.

Though man tried, they could never be justified by the law because the Old Testament law demanded perfection. The law could tell one when he sinned, but the law could not do one thing to save the sinner.

But the Old Testament was the Old Covenant. It was for people who lived before Jesus came and was given primarily for the nation of Israel.

When one enters a court of law as one who has violated the law, the law will say that he should be punished. The law does not give mercy. If one is guilty, he has to bear the consequences. If one receives mercy, he receives it from the judge or the jury.

The law just tells one that he has broken the law and must be punished. The law of the Old Testament pointed to Christ, showing people their need of Christ.

In Galatians 3:24 Paul said, “The law was our schoolmaster to bring us to Christ.” It led us to Christ. The law demonstrated the need for salvation and pointed to the Savior Jesus Christ.

Paul says that this “righteousness of God has been manifested, being witnessed by the Law and the Prophets.”

The law and the prophets spoke of the coming Savior. In Genesis 3:15, when Adam sinned in the Garden of Eden, God said, “And I will put enmity between you and the woman, and between your seed and her seed; He shall bruise you on the head, and you shall bruise him on the heel.”

That is the first promise of the Messiah. It demonstrates that the Messiah would be victorious over Satan. The law was pointing forward to the coming of Christ.

In the prophets, Isaiah said, But He was pierced through for our transgressions, He was crushed for our iniquities; the chastening for our wellbeing fell upon Him, and by His scourging we are healed. All of us like sheep have gone astray, each of us has turned to his own way; but the Lord has caused the iniquity of us all to fall on Him (Isaiah 53:5, 6).

Isaiah was pointing to the coming of Jesus and the reality of the good news. Next he says, “Even the righteousness of God through faith in Jesus Christ. . . .” (3:22).

Christ came into the world, carried out God’s plan, became a man, and willingly went to the Roman cross to die. He was faithful in what God wanted Him to do. The faithfulness of Christ made it possible.

The good news has come unto all. Why then are not all saved? Man has to accept it. The righteousness of God has come unto everybody, but it is upon only those who believe.

THE RICHES OF SALVATION

These verses, 3:21-23, set the stage for three key words in the Christian religion. Paul uses first of all the word justify in verse 24. He says, “Being justified as a gift by His grace.”

Jesus was the other party. We are justified, “as a gift by His grace.” It is a gift; it is an undeserved, unmerited, unearned gift.

The second word is redemption. Verse 24 says, “Being justified, as a gift by His grace through the redemption which is in Christ Jesus.” That is the freedom of slaves. We were enslaved in sin, but God freed us. We have been redeemed by a great price.

Third, he says, “[Jesus] whom God displayed publicly as a propitiation in His blood through faith” (3:25). Propitiation means satisfaction. Do we realize that our sins outrage the holiness of God? It infuriated God’s righteousness and holiness. His holiness and righteousness were satisfied, were propitiated by the blood of Jesus. He took my guilt and placed it on Christ.

THE MEANS OF ACCEPTANCE

No, He did not just pretend that sin did not exist. He dealt decisively with it. Second Corinthians 5:21 says, “He [Christ] made Him who knew no sin to be sin on our behalf, that we might become the righteousness of God in Him.”

God took our sin and placed it upon the sinless Christ, and He took the righteousness of the sinless Christ and placed it upon us. We cannot be indifferent toward God’s actions. Heaven and earth has moved to save sinners. We must not go merrily on our way as though nothing has taken place. He would have been just to have said, “Let them be lost forever. The wages of sin is death.

God is just, but He is also merciful. To satisfy His justice Christ died in our place; to satisfy His mercy  He  is  willing  to  save  sinners.  We  can accept this righteousness, justification, redemption, and propitiation by faith. It is through faith in His blood. I do not know any word that is more misunderstood than the word faith. There are those who would have you believe that the moment you accept as true that God has acted on your behalf through Jesus that you are saved.

James says the demons believe and tremble, but they are not saved. To be saved by faith we must have biblical faith. Is it not interesting that Paul, in 1:5 and 16:26, speaks of the obedience of faith? In Romans 6 he says, “You have obeyed from the heart the form of doctrine delivered, being then made free from sin you became the servants of righteousness” (6:17, 18). When do we become the servants of righteousness? When we obey from the heart. Having faith that obeys is not earning salvation; it is accepting salvation. We must move away from the theology of men and churches and move to the teaching of the New Testament.

How can I obey the form of doctrine so I can be made free from sin? What is the “doctrine”? It is the death, burial, and resurrection of Christ. That is the gospel summarized (1 Corinthians 15:3, 4). We are poured into the mold of the death, burial, and resurrection of Jesus. Romans 6:1-6 tells us how to do it. It says we are to die to sin as Christ died for sin. As Christ was buried, we are buried with Him in baptism. As Christ was raised, we are raised to walk in newness of life. I accept by obedient faith the free gift of God—justification,  redemption,  and  propitiation. I am made right with God when I accept His gracious gift by faith.