A study of Romans: The Righteousness of God #9 The Faith that takes God at His Word: Abraham Romans 4:1-11 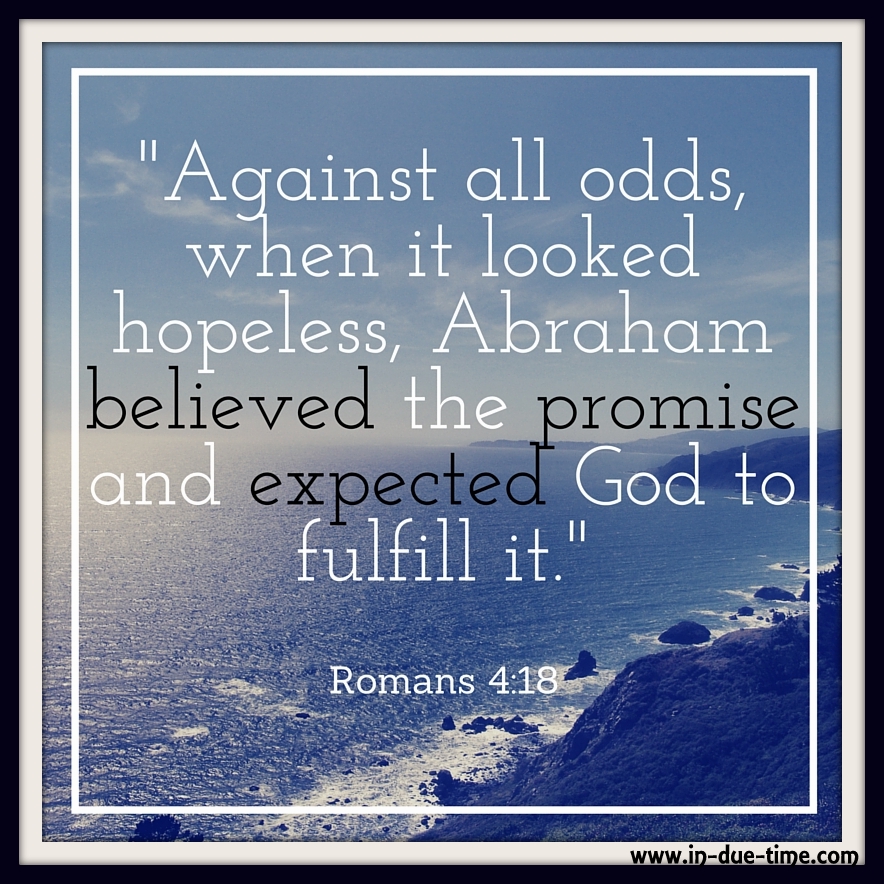 The Jewish Christians in Rome would have asked, “How does this doctrine of justification by faith relate to our history? Paul, you say that this doctrine is witnessed to by the Law and the Prophets. Well, what about Abraham?”

Paul accepted the challenge and explained how Abraham was saved. Abraham was called “our father,” referring primarily to the Jews’ natural and physical descent from Abraham.

It is important that we understand what faith means. Paul called two witnesses to prove that statement: Moses (Gen. 15:6) and David (Ps. 32:1-2).

Romans 4:1-3 (ESV) What then shall we say was gained by Abraham, our forefather according to the flesh? 2  For if Abraham was justified by works, he has something to boast about, but not before God. 3  For what does the Scripture say? “Abraham believed God, and it was counted to him as righteousness.”

Paul examined the experience of Abraham as recorded in Genesis 15. Abraham had defeated the kings (Gen. 14) and was wondering if they would return to fight again. God appeared to him and assured him that He was his shield and “exceeding great reward.”

But the thing that Abraham wanted most was a son and heir. God had promised him a son, but as yet the promise had not been fulfilled.

It was then that God told him to look at the stars. “So shall thy seed [descendants] be!” God promised; and Abraham believed God’s promise. The Hebrew word translated believed means “to say amen.” God gave a promise, and Abraham responded with “Amen!” It was this faith that was counted for righteousness.

THE MEANS OF IT: HOW WAS ABRAHAM MADE RIGHTEOUS? Faith does not mean simply giving mental assent to a truth. Biblical faith is a deeper and more meaningful concept.

No other name in ancient Israel was more revered than Abraham. He stood at the very head of that nation of people. Everyone in Israel understood that Abraham had a proper relationship with God.

But how did Abraham come to that right relationship with God? Let us look at the answer to that question from a negative viewpoint first.

Abraham was not right with God because of his ethnic background. Abraham lived in Ur of the Chaldees among idolatrous worshippers when he was called by God. Many people migrated from Mesopotamia into Canaan during the five hundred year period between 2000 to 1500 B.C. Abraham was one of them.

No one claims that Abraham was righteous because he came from Mesopotamia.

In 4:2, Paul says, “For if Abraham was justified  by works, he has something to boast about, but not before God.”

If Abraham  had  been perfect. God  would  have been indebted to him. Abraham would have gloried in his perfection.

Abraham was not declared righteous because of circumcision. In Genesis 15:6 the Bible says, “Abraham believed God, and it was counted to him for righteousness.”

Two chapters later in Genesis 17 the practice of circumcision as a sign or symbol of the covenant that God made with Abraham and His people was instituted. Abraham, therefore, was declared to be righteous before he was circumcised. Paul makes this point in Romans 4. How was Abraham’s righteousness reckoned? When he was in circumcision or in uncircumcision? In uncircumcision.

Romans 4:13 explains, “For the promise to Abraham or to his descendants that he would be heir of the world was not through the Law, but through the righteousness of faith.”

Why was Abraham declared to be right with God? The answer is found in 4:3, where Paul quotes from Genesis 15:6: “Then he believed in the Lord; and He reckoned it to him as righteousness.” Abraham is declared right with God because of his faith.

Our faith is in the Christ who died and rose again. It is by that faith that we accept God’s action on our behalf. It is by faith that a man is declared to be right with God.

An important question: Why faith? Why is it that if we are to be right with God it has to be by faith? The simple answer is no man can be justified in the sight of God by works of law. Law can condemn, but law cannot save.

God demonstrated in the Old Testament law that the law cannot give man the answer to sin. Under the law of Moses, animal sacrifices were offered over and over, demonstrating the ineffectiveness of animal blood to save a sinner.

Hebrews 10:14 says, “By the blood of calves and goats sin cannot be removed.” But those animal sacrifices in the Old Testament accomplished two objectives. First, they showed how man is a sinner and that those animal sacrifices could never remove sin. They also pictured the true Lamb of God, Jesus Christ, who was offered as a perfect sacrifice for sin, not over and over but one time only.

Man’s faith is to be in Christ. Even the Old Testament worthies who offered their animal sacrifices did so looking forward to the coming of the Messiah. When Jesus died on the cross, His blood was shed for those who lived in the Old Testament era, as well as for us.

If being right with God cannot be by law, then it must be by faith. That is exactly what the gospel is about. We place our confidence not in our  imperfect,  sinful  self,  but  in  the  perfect, sinless Son of God. When we place faith in Him, we are justified or declared to be right with God. It is a matter of grace, unmerited favor!

THE MEANING OF IT: WHAT WAS ABRAHAM’S FAITH?

If Abraham believed God, what was Abraham’s faith? If we can answer that question we will know what faith is. We will know how by faith we can be declared  righteous.

This threefold promise which God made to Abraham is found in Genesis 12:1-7. What was the promise? There will be a great nation; the nation will be given a land in which to dwell; God, in cooperation with that nation, will bring the Messiah into the world. The nation was Israel; the land was the land of Canaan; and the Messiah was Jesus Christ of Nazareth.

In the fulfillment of that threefold promise, Abraham himself never owned one foot of the Promised Land, yet God said He would give that land to his descendants. When God made the promise to Abraham, he did not have a child.

Add to this the fact that Abraham’s wife, Sarah, was barren. Yet God kept coming to him making that promise. In Genesis 15 God said to Abraham, “Look at the stars of heaven. As they are innumerable so shall your descendants be.” Abraham believed God. Paul says in regard to Abraham’s faith in Romans 4,

In hope against hope he believed, in order that he might become a father of many nations, according to that which had been spoken, “So shall your descendants be.” And without becoming weak in faith he contemplated his own body, now as good as dead since he was about a hundred years old, and the deadness of Sarah’s womb; yet, with respect to the promise of God, he did not waver in unbelief, but grew strong in faith, giving glory to God, and being hilly assured that what He had promised, He was able also to perform (vv. 18-21).

Eventually, God gave Abraham a son. But in Genesis 22 God startled Abraham by saying, “Abraham, I want you to offer Isaac as a burnt sacrifice to Me.” The great nation is to come through Isaac, but God says, “I want you to kill Isaac.”

In chapter 2 of his book, James brought up that very event. He said, Was not Abraham our father justified by works, when he offered up Isaac his son on the altar? You see that faith was working with his works, and as a result of the works, faith was perfected; and the Scripture was fulfilled which says, “And Abraham believed God, and it was reckoned to   him as righteousness,” and he was called the friend of God (vv. 21-23).

Paul says in 4:23-25, “Now not for his sake only  was  it  written,  that  ‘it  was  reckoned  to Him,’ but for our sake also, to whom it will be reckoned,  as  those  who  believe  in  Him  who raised Jesus our Lord from the dead, Him who was delivered up because of our transgressions, and  was  raised  because  of  our  justification.”

Abraham believed God, and his faith was counted righteousness. Romans 4:23-25 was written for our sakes because if we believe on the crucified, resurrected Lord we will be righteous too.

In Romans 4:6-8, Paul used David as a witness, quoting from one of David’s psalms of confession after his terrible sin with Bathsheba (Ps. 32:1-2).

David made two amazing statements: (1) God forgives sins and imputes righteousness apart from works; (2) God does not impute our sins.

In other words, once we are justified, our record contains Christ’s perfect righteousness and can never again contain our sins. Christians do sin, and these sins need to be forgiven if we are to have fellowship with God (1 John 1:5-7); but these sins are not held against us.

Faith means to trust God to do what He says He will do—namely, save us through faith in Christ. But it is also obedience; it is obeying the commands of God. When one has biblical faith where he trusts and obeys God, he accepts Jesus’ statement:  “He  that  believes  and  is  baptized shall be saved.” It is only with manmade theological opinions that man has a problem. Biblical faith is a trusting, obedient faith. It is by that trusting, obedient faith that you can be right with God.

Posted by Gary Davenport on July 5, 2021 in Romans